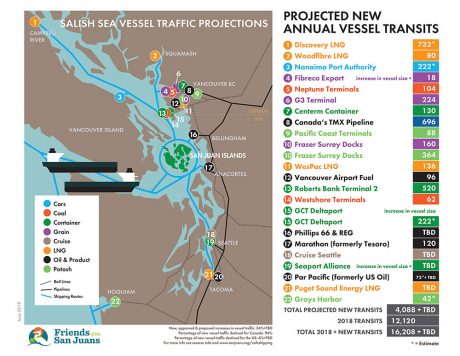 Friends of the San Juans identifies an additional 2,044 ocean going vessels making 4,088 transits to and from ports in British Columbia and Washington State from 24 new or expanding proposals.

“All these projects have one thing in common; increased air and noise pollution that could affect the Southern Resident orcas ability to communicate, socialize and successfully hunt for scarce prey. More disturbance means these starving animals will work harder to catch food, further depleting their reserves and releasing toxins in their bodies. A major oil spill from propulsion fuel from any one of these vessels could cause the Southern Residents’ extinction and impact our economy,” said Stephanie Buffum, Executive Director of Friends of the San Juans.

Friends of the San Juans has been monitoring new and expanding terminal and refinery projects throughout the Salish Sea for five years; sharing these vessel traffic projections at transboundary forums and conferences, and informing the public and decision-makers about the need for more cumulative impact analyses to address the necessary protection of our water, wildlife, and coastal communities.

In 2018 there were 12,120 large, commercial ocean-going vessel transits in the Salish Sea. These vessel transits don’t include local barge traffic, anchoring, cueing, and/or bunkering (ship fueling) transits; or the many ferry boat transits, and the pleasure, fishing, and small commercial boats that share these transboundary waterways. 94% of the projected commercial vessel traffic is destined for Canada.

Approval of the Canadian Federal Government’s Trans Mountain Pipeline expansion will increase tanker traffic exporting tar sands diluted bitumen, increasing the likelihood of a 660,450 gallon or larger spill over the next ten years in Haro Strait and Boundary Pass by 800%.

“A majority of these projects are in Canada. We can’t look at these project applications alone. Their cumulative impacts of underwater noise, air pollution and oil spill risk threaten our economy, environment and culture of the Salish Sea,” added Buffum.

Friends of the San Juans is a public interest non-profit based on San Juan Island since 1979 with the mission to protect and restore the San Juan Islands and Salish Sea for people and nature. For more information:www.sanjuans.org/safeshipping.