Preserving History One Shingle at a Time 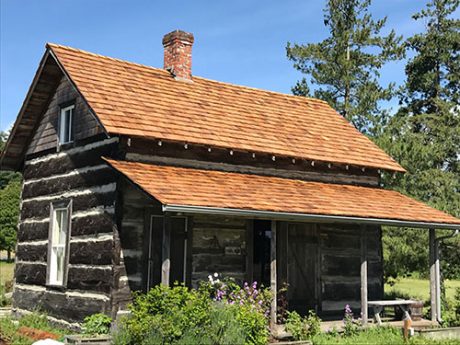 The Scribner log cabin located on the grounds of the San Juan Historical Museum has recently had the roof replaced. A benevolent, anonymous donor provided the funds to cover the cost of the project. We thank them for their generous gift to the Historical Museum and for helping to preserve the 128-year-old structure. 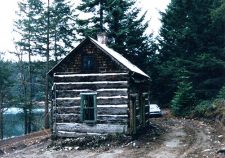 Scribner Cabin before the move in 1988 – Contributed photo

Edward Scribner, his wife Alice and three of their children came to San Juan Island from Michigan, around 1890. In 1891, Edward, his father James and father-in-law Arthur Malcolm built the cabin. The planks that form the walls were hewn with broad ax and adze from massive old growth logs. The well-built cabin has stood the test of time and is indicative of dwellings built during the homestead era, which began in the 1870s.

The family lived in the cabin for twelve years while Edward worked as a carpenter and shipwright. During that time, Edward and Alice raised nine children – six of whom were born in the cabin – which consisted of two rooms and a sleeping loft. The family moved to a home on Web Street in Friday Harbor around 1903 and welcomed three more children into the family for a total of twelve children. They maintained ownership of the cabin for a number of years and continued to use it as a fishing cabin.