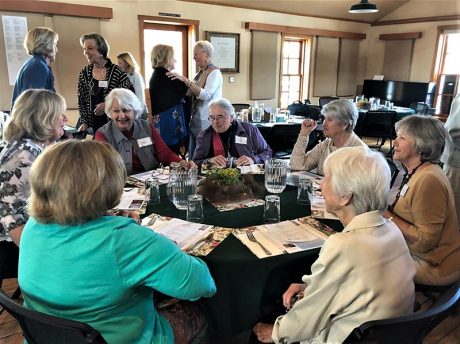 The Women’s Fund celebrated 16 years of giving at their annual member luncheon held at Brickworks on June 20th. Ninety women and girls attended this traditional gathering, organized by Michele Gosinski and emceed by Gay Graham.

At the Luncheon, Lisa Holt and a team of volunteers (human and canine) from PADs for Parkinson’s gave a riveting, educational and entertaining demonstration of how the trained volunteer dogs can identify a unique odor of a person with the disease, distinguishing them from people without Parkinson’s.

PADs dogs contribute to Parkinson’s research, helping identify the molecular markers of Parkinson’s and, hopefully, leading to a cure. Parkinson’s is a neurological disease that can lead to the loss of the brain’s ability to control the body, including, in the long run, swallowing and breathing. To learn more about PADs for Parkinson’s, visit padsforparkinsons.org. The Women’s Fund has provided $3,800 in support of the PADs program in recent years.

The SJI Women’s Fund was formed in 2003 as a collective giving model to help women participate in philanthropy and make a greater local impact by pooling their funds. It is structured as a donor-advised fund held by the San Juan Island Community Foundation. Membership is $100 per year and is tax deductible. Members vote to award grants three times annually to local nonprofits submitting proposals to the Foundation. More than $235,000 in funds have been granted by the Women’s Fund since its inception.

To learn more, or to join the Women’s Fund, visit sjiwomensfund.org or contact Susan West, the Coordinator, at susan.west@mac.com.