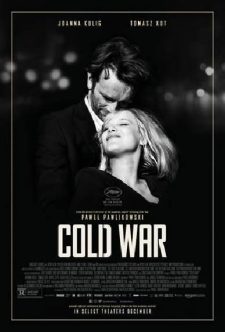 A passionate love story between a man and a woman who meet in the ruins of post-war Poland. With vastly different backgrounds and temperaments, they are fatefully mismatched and yet condemned to each other. Set against the background of the Cold War in 1950s Poland, Berlin, Yugoslavia and Paris, it’s the tale of a couple separated by politics, character flaws and unfortunate twists of fate – an impossible love story in impossible times.

This a beautiful film.  The story is interesting but the camera work, music and terrific work of its two main characters push it to the top of this year’s list.  It is reminiscent of Bogart films from the middle of the last century; done in black and white through a lens that adds a wispy overlay and a soundtrack that is unforgettable. Besides, when did you last see a film in Polish, French, German, Russian, Italian and Croatian? Not suitable for children.

Please remember that no admission will be charged again this year but we do ask that you consider making a donation to the Theatre in appreciation for sponsoring these films.  Also note that $2 bottomless popcorn will be available, this year with a variety of exciting new toppings.