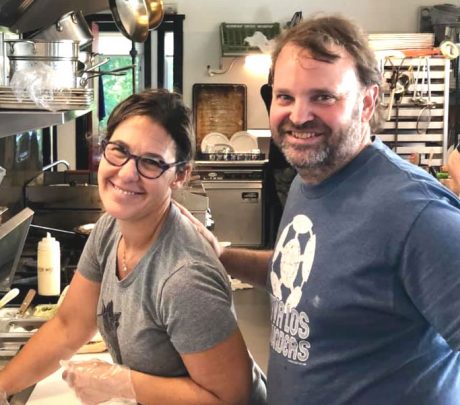 This story was contributed by Laurie’s aunt Carol Meyer…

There are very few people in this world that have a “heart and soul” such as Laurie Paul. On August 20th, that heart and soul will be recognized by many living in Friday Harbor as they gather to celebrate her 50th birthday.

Fortunately for Friday Harbor, Laurie relocated from Florida after falling in love with the island and never looked back. She began working in restaurants as a sous-chef on the island learning the trade from the ground up. After several years of “paying her dues” with hard work and sweat, Laurie met Tim Barrette and alas, “The Market Chef” restaurant and catering service was born. It is now one of the most popular food service businesses in Friday Harbor.

Additionally, Laurie and Tim have been recognized in several food magazines making both the Paul and Barrette families very proud.

Laurie and Tim have been very involved in their community for many years and have made an abundance of friends that love them and their two children. Several holidays throughout the year are celebrated together as one big family and luckily for all, include the outstanding and unique recipes from “The Market Chef”.

August 20th will again include several friends and family that have planned various celebrations.

All Friday Harbor should raise a glass and toast to Laurie as well, in hopes that the good work and contribution she has made to her community will continue for many years going forward.