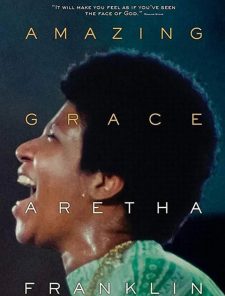 Well this year’s film series is approaching its end.  I want to thank all of you for meeting us at the movies and supporting your local theatre.  As you know, for the past two years, we have not charged for admission, preferring a “pay what you can” model that encourages more of our island community to attend.  If you have been meaning to contribute but haven’t gotten around to it, now is your chance!  You can either deposit your cash or checks at the theatre before the movies or mail a check to:

Please indicate that your donations are in appreciation of the Summer Film Series.

Having scored 11 consecutive No. 1 songs, the queen of soul was 29 and at the height of her powers. For two nights in a Baptist church in Los Angeles, she revisited her gospel roots. Six months later, a two-disc LP of the concerts was released, and it remains the biggest-selling live gospel album of all time.

What many didn’t realize is that those concerts were also filmed by legendary director Sydney Pollack. That footage was, as the song goes, lost but now is found. You don’t need to be a churchgoer to find “Amazing Grace” a soul-stirring, foot-stomping, hand-raising experience. When you hear Franklin, with that most gloooo-ree-us voice, magnificently turn one syllable into five, you’ll be moved to hand-clapping ecstasy just as Mick Jagger was when he joined the congregation on one of those nights.

This movie is recommended for music fans, particularly lovers of gospel music.  Also for history buffs.  Suitable for all ages.