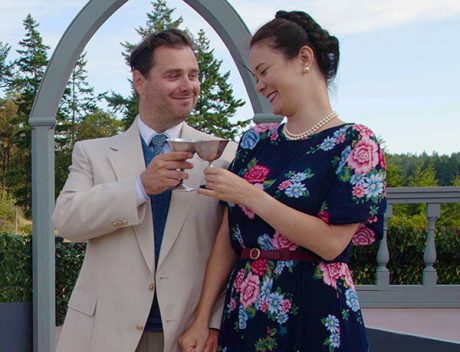 Once it’s gone, it remains only in the memories of those who saw it. Make one of those memories yours.
Playing 7:45 pm Thursdays – Sundays at 1062 Wold Rd, Friday Harbor until August 11.

Here are some reviews from the last 3 weeks:

“The Merchant of Venice”, so well directed and played. Very enjoyable and understandable. Thank you, Helen, for answering all my questions and making it easy for us to attend. It was so much better than I thought it could be . . . enjoyable in so many ways. Ron

We saw it Sunday – an extraordinary performance and a valuable, challenging tale for our “interesting times” Brent & Maggie

Fabulous show! ISL always does a great job, but they knocked this one out of the park! Susie

BRAVO! A superb and deeply thought-provoking production. Not to be missed! Alex

It was so well played and so intriguing that I want to see it again! Dan is fantastic! His best performance ever! We have been talking about it and processing it since Sunday. This is no ordinary play! Karin

GREAT show on Friday night. My brother and his wife were so impressed — as were Stan and I! Thanks for the garden picnic space. Susan M

I love what they bring to the island. So lucky! Susan A

This is a RAVE for Helen Machin-Smith and the cast of Island Stage Left’s production of Shakespeare’s “The Merchant of Venice” The opening night performance was in keeping with Stage Left’s deserved reputation of wonderfully acted, tightly directed and cleverly set plays. It’s a complex play and a very human one, leaving room for many interpretations. It’s funny when it should be and utterly devastating when it needs to be. Machin-Smith’s sensitive direction emphasizes the emotional impact of the story of revenge, betrayal and religious intolerance. Helen’s directorial decisions leave the audience with much to think and perhaps argue about – go see it, think about it, discuss it. I found it thought provoking, disquieting and much more than mere entertainment. Well done, Stage Left! James

I love a play that leaves me thinking. Susan M

Put this on your calendar for thought-provoking theatre! Penelope