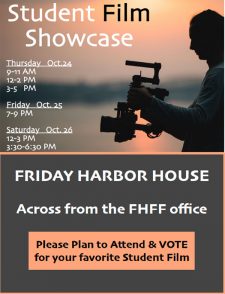 For its seventh year the Friday Harbor Film Festival is adding an exciting new category of films — the Student Film Showcase. The films entered in the contest for The László Pal Emerging Filmmaker Award, recognizing emerging young talent in filmmaking, will be shown at the Friday Harbor House on Thursday, Friday, and Saturday, October 24-26. Entry to view these films is FREE.

Audience members will have the opportunity to vote for their favorite films. These votes will be used to choose the Audience Choice Awards, to be presented on Sunday evening, in the two student categories — 13-17 years of age and 18-26 years of age.

A panel of award-winning filmmakers will judge the films and select the winner of The László Pal Emerging Filmmaker Award. It will be presented to the creator of the Festival’s best student film during the Audience Choice Awards on Sunday evening. László Pal was an Emmy Award winning director, cinematographer, writer, editor, and producer. He created films in many places around the world, while also educating young filmmakers at the University of Washington.

The 2019 Friday Harbor Film Festival program is available at the FHFF office (10 First St., Friday Harbor) and on the Washington State ferries.  Full information about the Festival can be found at FHFF.org.