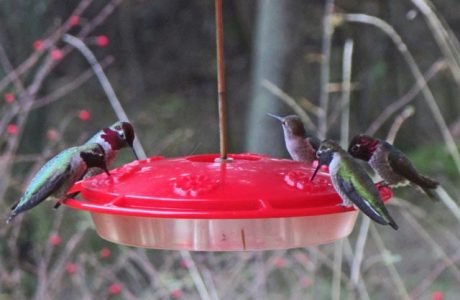 Recently, however, another species of hummingbirds, the Anna’s Hummingbird, has decided that the islands aren’t a bad place to overwinter… with a little help from humans. When I moved here 40+ years ago, there were no Anna’s here in the islands. However, climate change has moderated our winter temperatures and Anna’s have extended their northern range to include the islands. But they need our help.

Because of their high metabolic rate, hummers must take in sustenance quite often during the day. Annas go into a torpor (semi-hibernation) state which will get them through night, but at dawn they rapidly need food. Hummers typically must consume two to three times their body weight in nectar for survival. Denial of nectar for an hour or so could cause them to starve, especially in cold weather.

Here are a couple of other things we need to watch for. First, when the temperature drops belong freezing, watch that the nectar doesn’t freeze. I find that at about 28 degrees the sugar nectar will begin to freeze. If the weather report predicts temperatures down to that level, it is good idea to bring the feeders in at night and then put them out just before dawn. I keep an extra feeder with room temperature nectar in it. When I see that the outdoor nectar is beginning to freeze, I swap it with the extra feeder. Secondly, when it snows, don’t let the snow build up on the feeder to the point where the hummers can’t feed.