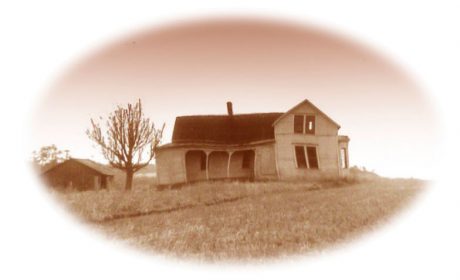 Local his­to­ry some­times includes tales of a decid­ed­ly unearth­ly – or at least spooky – nature. Per­haps the most well-known of this island’s spooky tales are about the Cry Baby House. Once a home­stead land­mark at False Bay, this house is pic­tured here in an undat­ed photograph.

Some islanders who were chil­dren here in the 1940s and 1950s may remem­ber pass­ing this house on their school bus route. It was already an old farm house then, report­ed­ly stand­ing since at least 1880. Those who were teenagers in the 1960s and 1970s are more like­ly to have expe­ri­enced the house as the Cry Baby House, a place where strange things hap­pened. Regard­less of age or gen­er­a­tion, peo­ple here have passed down sto­ries about the Cry Baby House for years.

Many of these ghost sto­ries are about a cry­ing baby inside the house. But the house is found to be emp­ty. No one there. Anoth­er is about a woman who is seen walk­ing along False Bay Road in search of her lost baby. Report­ed­ly, a woman who once lived in the house did have a baby who died in a fire there. Anoth­er sto­ry about her is that she buried mon­ey some­where in the field where she could see it from her rock­ing chair. A rock­ing chair which still rocked when no one was in it.

A Mrs. Smith lived there in the ear­ly 1940s. She is said to have left crack­ers and milk out every night for a girl ghost who would appear. After Mrs. Smith’s time in the house, renters in the 1950s and 1960s report­ed hear­ing eerie nois­es from an upstairs bed­room. They would some­times hear the faint sound of a child cry­ing. Once a vis­i­tor to the home saw the image of a woman com­ing down the spin­dle stair­case but dis­ap­peared before set­ting foot in the room. Anoth­er time, a vis­i­tor to the home swore she saw an object fly on its own across the liv­ing room.

Roy Ham­mers lived in the house in the 1960s, although we haven’t heard any sto­ries involv­ing him. Lat­er in the late 1960s or ear­ly 1970s, Grace and Boyd Miles lived there after it had been emp­ty for a while. They were either joined or fol­lowed by their daugh­ter Nor­ma Smithrud and her sons David and Gary.

Vacant once again, for sale and aban­doned by the ear­ly 1970s, teenagers would dri­ve out to the house to look for ghosts and go about scar­ing each oth­er in the process. Seances by can­dle­light were an attempt to draw out spir­its of the night, or at least signs of an addi­tion­al pres­ence in the room. An often-told tale of the house burn­ing to the ground in a spec­tac­u­lar fire one Hal­loween night is con­firmed in some detail by an arti­cle in the San Juan Jour­nal dat­ed Novem­ber 7, 1974 which led with the head­line of “Ghosts Gone.” This arti­cle referred to the house as San Juan Island’s “haunt­ed house” and the “cen­tu­ry-old Smith place near False Bay.” It goes on to say the house “was report­ed to be haunt­ed by a cry­ing baby, strange lights, and a ghost­ly black car.” Oral tra­di­tion is that some teenagers were in the house that night, as usu­al on Hal­loween, when an acci­den­tal fire start­ed by can­dles got out of control.

Dri­ving by the site of the house today, all that can be seen is an open field. But when daf­fodils bloom in the spring, that’s the time to go look. There will be some daf­fodils, plant­ed long ago in a line where there was once a dri­ve­way up to the house, set back from the road about 200 feet.

If you have a sto­ry or mem­o­ry to share about the Cry Baby House, or a cor­rec­tion to our time­line, please leave a com­ment for the San Juan His­tor­i­cal Soci­ety and Muse­um. It’s all part of our island’s story.