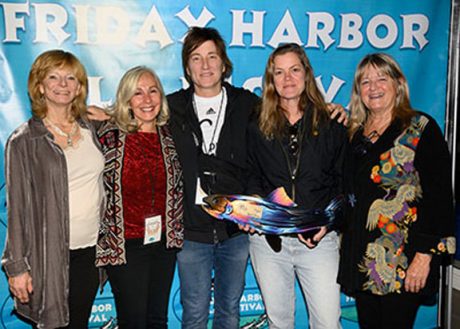 Kathlyn Horan, director of The IF Project, displays the Festival’s trophy, presented to her as winner of the Audience Choice Award. On her left is Kim Bogucki, the Seattle police officer who developed the life-changing program. From left to right are FHFF volunteers: Producer Karen Palmer, Board Member Susan Waters, Kim, Kathlyn, and Director Lynn Danaher. Matt Pranger photo

The results of voting by Friday Harbor Film Festival’s audience members were announced on Sunday evening, October 27, at the grand finale of the Festival that featured awards presentations and screenings of the top-winning films.

Awards were also presented to the Local Hero and the Laszlo Pal Emerging Filmmaker. The majority of the winning films are about women, directed by women, which is serendipitous and appropriate, as women in film are being celebrated this year by many organizations.

These are the winners in each category:

The Festival is grateful to all of our sponsors; providers of food, drink, SWAG bag items, and lodging; and the many volunteers who made the event successful. Thank you!