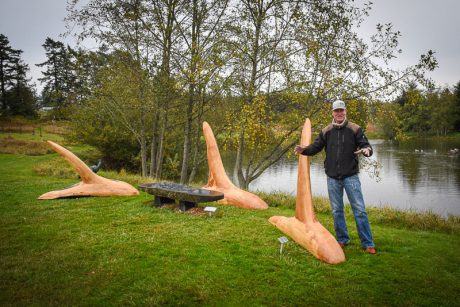 Jim Burgess talks about the creation of his orca sculptures

Some new sculpture was installed at San Juan Island Sculpture Park on Saturday, October 12. It is three pieces depicting members of the Southern Resident Killer Whales. Left to right in the photo above are Nyssa (L-84, died 2019), Ruffles (J-1, died 2010) and Scoter (K-25, died 2019) all carved from western red cedar by local artist Jim Burgess.

Jim and his family have had a love for the SRKW’s dating back to 1999 when they visited the island and among other things, went fishing. Kristen, Jim’s wife tells the tale of how out on the water, their daughter Kara, then 4 yrs old, was slapping the water with her hand. When asked what she was doing, Kara replied “I’m calling the whales to come visit us”. Kristen and Jim laughed and explained that it doesn’t work like that, but Kara kept on slapping the water.

And then about 5 minutes later, Splash showed up with then newborn and as yet unnamed “Luna”. Both Splash and Luna circled the boat about 3 times before finally saying goodbye.

Kara said “See I told you” and from then on the family had a strong connection to the whales.

Through the Whale Museum they participated in the whale adoption program and when they received adoption papers with more information, they were shocked and saddened to learn about high levels of contaminants in the whales’ bodies.

Kristen, being a geologist whose work included cleaning up waste sites, contacted Ken Balcomb of the Center for Whale Research to see if she could offer any help and so began the family’s quest to bring awareness to the plight of the SRKW’s. 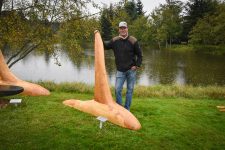 Fast forward to about 2014 and Jim, an arborist and wood artist who makes carved bowls and tables is working at an Everett, Washington golf course, helping to remove an ailing tree for safety reasons. A huge, beautiful old western red cedar came down and broke into pieces on the fairway and in those solid broken branches, Jim saw whale dorsal fins.

He very carefully took the pieces home and after letting them season outside for about 4 years he began carving to let the whales be seen. Jim muses about the process, saying he was inspired by the words of Michelangelo and Rodin, that an artist can see the subject coming out of the wood. “The tree did all the work, all I did was clear away the clutter” he says.

In the Summer of 2018, his daughter Kara, who at the time worked at the Center for Whale Research, mentioned the carvings to Ken Balcomb who was very intrigued and allowed Jim to place Ruffles at the Center’s outreach office in Friday Harbor; thus starting the sculpted whales’ journey of raising awareness of their plight. The whales were soon featured at the “Deep Dive” documentary film presentations, and the San Juan Island fundraiser for the Community Theater. That journey continues at the Sculpture Park.

As you enter the sculpture park and walk toward the pond, you will see them at the water’s edge, circling the San Juan Island bench. There they will remain through November, and then be taken indoors for the winter, to be displayed at the Center for Whale Research in Friday Harbor at 185 First Street before being returned to the sculpture park next spring.