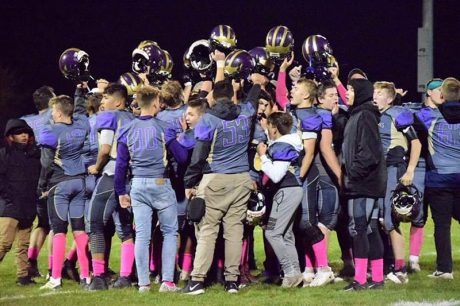 Friday Night the FHHS Wolverines look to extend their five-game winning streak as they travel to LaConner to take on the Braves.  LaConner is 1-4 on the season and has lost two straight. During the Wolverine’s winning streak they’ve outscored their opponents 246-7 and have shutout 3 consecutive opponents.

The game will be streamed live Friday the 18th on YouTube at: https://www.youtube.com/c/FridayHarborTinyRadioTV and FHTinyRadio.com

The Lemon Computers Pregame Show begins at 6:30 PM with the Kickoff is at 7:00 PM

The Wolverines offense’s bread and butter has been their “Thunder” and “Lightning” packages.  Thunder being Kaden Richie at tailback and Lightening being Kyson Jackson with bruising fullback, Mateo Blackmon, leading the way. With 17 touchdowns and 1,190 rushing yards on the season, Jackson knows who butters his bread.

“Our offensive line is where it all starts,” Kyson said.  “Mateo is a beast and our O-line is nasty.” He says that the running backs are often not even touched until they are 5 yards past the line of scrimmage.

The nasty boys Jackson is referring to are:

The tailback tandem of Richie and Jackson has rushed for nearly 1,700 yards and backfield has a combined 28 TD’s (Jackson 17, Richie 6, Blackmon 5).  But perhaps the most gaudy numbers netted by the backfield is that Jackson is averaging a staggering 13 yards per carry and nearly 200 yards per game…despite not touching the ball in the 4th quarter during the winning streak.

But as a 2B classified school it’s not like the gaudy numbers have been a product of playing weaker opponents.  They’ve played one league contest thus far and have played four 1A schools and 2A Foss last Friday night.

In all classifications Friday Harbor ranks in the top five in scoring in Washington at 249 points but the defense is even nastier as the state’s top overall defense in surrendering just 14 points on the season.

Again, it starts up front for the Wolverines.  Their defensive front 3 are junior, Austin Wynne at left tackle, and seniors Weston Swirtz at nose guard and Ty Vague at right tackle.

“Swirtz does a great job of occupying space and eating up blockers,” says Friday Harbor Tiny TV play-by-play announcer, Bryan Jackson.  “He frees up Wynne and Vague to create havoc in the backfield.”

And havoc they have created.  They haven’t been scored on in the past 3 games and have shutout 4 of their 6 opponents and have given up just 14 total points on the season.  In the three consecutive shutouts the defense has given up a mere 121 total yards.

He says that another component that makes the defense so effective is each player’s belief in their teammates.  He said each player takes pride in executing every play. “And they trust that their teammate next to them will do the same,” he said.

Bryan Jackson says that they have been executing at an incredibly high level through the first 6 games.  “Friday Harbor has outscored their opponents by an incredible margin of 249 – 14,” he noted. “That is the second-largest point differential in the state.  But come 7:00 PM in LaConner, none of that will matter to anybody on the team. The score will be zero to zero.”