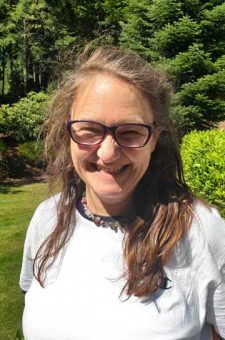 The Mullis Center has a new lead cook. I was delighted to learn the new cook is my friend Kate Stone.  Kate recently returned to San Juan Island after moving with her family to New Zealand for a 5-year adventure that stretched into 13 years.

I can vouch for Kate’s cooking. I first met Kate when she had Katrina’s, where Mike’s Wine Bar is now. It was a favorite meeting place for a circle of girlfriends and there was always something tasty on the menu. Later, I lived across the street from Kate and often enjoyed the joyful mayhem of her young family and always, there was something good to eat at Kate’s.

Kate began her culinary studies taking omelet and crepe classes at a department store in Portland then becoming her family’s omelet maker. Her Grandma Cora had a chowder house styled restaurant on Hood’s Canal. Kate grew up eating oysters and clam chowder and on special occasions Oysters Rockefeller.

Later, while working as a deckhand in Alaska she said, “I usually was the cook, as well.” There she married a fisherman and started a family, taking on many cooking and baking jobs along the way. After her first husband’s untimely death she returned to Oregon and purchased a converted school bus that she eventually moved, with her then teenage daughter, to San Juan Island.

It wasn’t just my girlfriends and I who enjoyed meeting at Katrina’s. Kate met her husband Jordan, “I married one of my favorite customers” at Katrina’s. Kate had two more children before taking a family vacation to New Zealand where they learned that their professions were in demand.

Returning to New Zealand for a longer stay, besides trading baked goods with neighbors and teaching sourdough bread-making classes, Kate earned her Masters Degree in Screenwriting from Auckland University of Technology. She has written 3 feature length scripts and returned to San Juan Island to write. Working 3 days a week at the Mullis Center she says, “is manageable with such aspirations plus, it provides social contact and heartfelt volunteers to collaborate with.” Welcome back Kate!