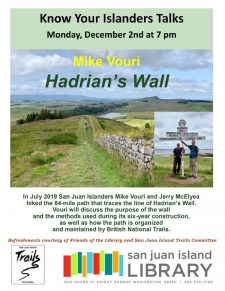 In July 2019 San Juan Islanders Mike Vouri and Jerry McElyea hiked the 84-mile path that traces the line of Hadrian’s wall, a massive fortification erected by the Roman Emperor Hadrian beginning in 122 AD.

Vouri will discuss not only the purpose of the wall and the means and methods used during the six-year construction, but also how the path is organized and maintained by British National Trails.