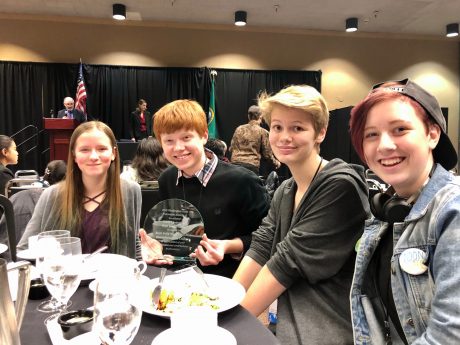 The San Juan Island Prevention Coalition is proud to announce our youth prevention team, Rock Solid, was awarded top honor at this year’s WA. State Prevention Summit in Yakima! Rock Solid has successfully returned each year since 2011 to complete a meaningful prevention project in our community after attending the training sessions offered at the WA. State Prevention Summit. This award recognized their efforts, and they share it with our community for their ongoing support. We can’t do this work alone; collaboration is key!

Rock Solid has been sustainable because they mentor the younger students in our community, so they can build off the prevention efforts of graduating teens in our schools. Rock Solid implemented a suicide prevention awareness campaign in our Friday Harbor Middle and High Schools (FHMS/FHHS) for the past two Decembers.

This year we hope to include this campaign at Spring Street International School (SSIS), as we have a new Rock Solid member who attends SSIS. Each student will receive a wallet-sized Suicide Prevention pamphlet, a Post-it Note from Rock Solid with local resources for teens to get support if they feel overwhelmed, and a mini candy cane to send them off on their winter breaks. The positive feedback the Rock Solid youth get from their peers about this gesture keeps them wanting to reach out and support one another.

Also, Rock Solid spent eight months last school year with their Escape the Vape campaign in the FHMS and FHHS. Rock Solid created and implemented a ten week-long trivia contest to test their peers’ vaping knowledge. Which included: producing PSA videos, which they viewed in Advisory, tested a PE class with a peak flow meter over a few months. They included a pre and post vapor history questionnaire, so they could see if there were any noticeable differences among those that reported vaping and those that reported not vaping. Interestingly noted, those that reported not vaping overall had higher peak flow meter results. We know this was a tiny sampling, but it begs the question for more studies.

Rock Solid found it got the conversation started around lung health and vaping. Rock Solid also collected data from their classmates, pre and post surveys so that they could measure their impact from all their Escape the Vape activities. They found nearly 60% of their high school peers said they learned new information from Rock Solid’s activities. They also had a humorous approach with one PSA, #LeaveMeBeIJustNeedToPee, as they work to reclaim the bathrooms, so they don’t have to smell those sickly sweet vapors. We salute Rock Solid for their incredible effort to help their peers understand the risks associated with vaping. Congratulations, Rock Solid, on your well-deserved award! 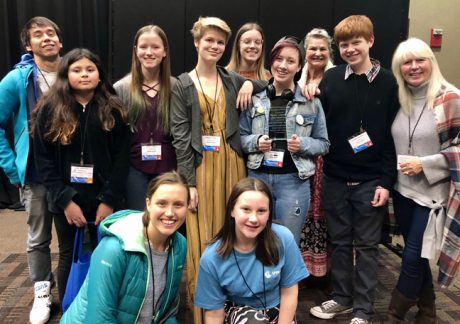