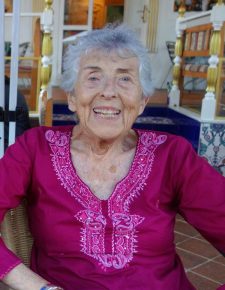 Anne Blackburn, née Olive Anne Freeman, died Wednesday 20 November 2019, age 89, at her home in El Cerrito, California, from complications associated with her long-standing heart condition. She was surrounded with love by her daughters and grandchildren and two close family friends at the time of her passing.

A loving, generous, witty and insightful person, Anne spent most of her years in proximity to the ocean, which she loved. Born 30 October 1930 she was raised at Newport Beach, California with her beloved brother Dickinson (Dick) Reed Freeman.

Most of the first half of her life was spent in Southern California, living in La Jolla after her education and first teaching job, raising children there with her first husband Tiem (Harold Herman) Tiemroth, Jr. and second husband Maurice Blackburn. Daughters Suzan and Anne Margaret, and son Erik, grew up in La Jolla, regularly joined by their brothers and sisters John, Betty, Katy and Richard, born to Maurice and his first wife Florence.

Anne and Maurice treasured the visits of their much-loved grandchildren: Jean and Liz Blackburn, Max Joy, Lisa and Daniel Guernsey, Lucía and Roberto Hamilton, Gillian Perkins, and Mariana and Marcio Zavala. Anne’s god-daughter Charlotte Plog Couto and god-buddy Bryanna Plog were always at the heart of Anne’s life along with their parents Debbie and Bryan.

Anne became a member of Society of Friends in 1960, deeply impressed by the social inclusivity and pacifist principles of Friends, and by the Quaker teaching that there is divine light in every person. She was a member of the La Jolla Monthly Meeting, the San Juan Island Worship Group after moving from California in 1978, and finally Berkeley’s Strawberry Creek Meeting.

A dedicated teacher, Anne expressed that vocation in different ways during her rich and varied life. Her first teaching job was in Camden, New Jersey. That experience of the disturbing racial inequalities of the United States marked her deeply and helped to motivate Anne’s life-long interest in egalitarian communication and social justice. While her teaching contributions ranged across age levels, from day care to adult education, Anne was consistently committed to education as a corrective to disenfranchisement, and deeply interested in the interrelation between students’ emotional well-being and their capacity to learn.

A celebration of life in the tradition of Friends will be held in California. In lieu of flowers, Anne suggested donations to the following organizations: The Nature Conservancy, Right Sharing of World Resources, and Subud USA.