Best of the Fest from Friday Harbor Film Festival 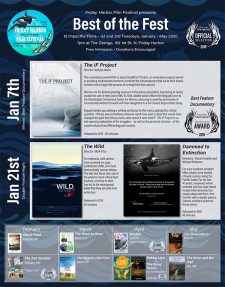 Friday Harbor Film Festival’s annual Best of the Fest series begins January 7. Award-winning, impactful feature films and shorts from the 2019 Festival will be shown every first and third Tuesday from January through May at the Grange beginning at 7 pm. These screenings are free, although donations are encouraged.