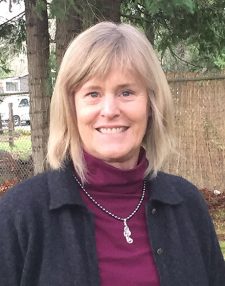 After 23 years heading County Parks, and nearly half that long running the County Fair as well, Dona Wuthnow has decided she’s ready to start a new chapter.

She’ll definitely stay on the island, she said, and she hopes to work in something natural resource conservation-related. She is passionate about parks “as part of our public commons” and the way they provide “natural and more serene connections for people to the environment and each other.”

Dona was living on Shaw in 1996, when a member of the County Park Board, Janice Ekstrom, came to find her and see whether she would apply for the part-time job as County Parks Superintendent.

She wasn’t sure she wanted to go back into government work (she had been a recreation forester for the U.S. Forest Service for more than eight years, most recently in Skykomish) but after touring the county parks she says “the challenge of bringing the parks up to a standard the community and visitors could enjoy” made her decision.

Her first day on the job was all about finding an office space to work from. “The parks were pretty dilapidated in those days, especially the bathrooms & water systems; there were no other employees, just some contracted campground caretakers; I had to find ways of paying for the parks,” she explains.

The first park commercial use permit was issued to Warner Bros. for the movie “Practical Magic” in late 1997 – filmed at the county park on San Juan – and it brought in $80,000, which paid for the new bathrooms there. Others since then have included annual commercial kayaking and bicycling group permits that have provided significant revenues supporting the parks.

The year 2009 was a challenging one for budgets in all county departments, when the possibility of trying to “close” the smaller county parks loomed. Clearly they would have been closed in the sense of no maintenance, but there was no practical way to keep the public out. A number of people on each island volunteered to help with maintenance, and the parks remained open. The following year the first County special property tax levy that supported parks and fairgrounds passed by a large margin, giving stable tax funding to the programs for the first time.

County Parks and the Fair Departments came together under Dona’s management in 2010. Combining the two departments makes sense, in her opinion; there are many synergies in the programs provided to the community. The budget and administration are combined, and staff share the work load throughout the year.

The upcoming budget year brought challenges again, because as the costs go up county tax funding can’t keep pace. In her first budget discussion with the Council, she showed a shortfall of over $100,000 and possible major reduction of park services to close the gap. So a number of possibilities for raising revenue were considered by the county council, including glamping, food trucks, new major events at the fairgrounds, and closing down Shaw County Park entirely or only the campground.

These ideas were ultimately rejected by the council, and instead camping fees were raised, and the department will offer the public more opportunities to donate to the parks and fairgrounds. Thanks to special donations by Fair Board members Barbara Bevens and Jennifer Rigg, the department is launching a new retail program for exclusive logo products. The program will go live sometime in January.

The department manages 18 parks on four islands including the fairgrounds and maintains several Land Bank preserve day use facilities. It still offers “early reservations” to county residents for camping in the parks, and this year local residents reserved 176 campsites for 415 camping nights throughout the summer during that early reservation program. It has become a tradition in a number of families to camp annually at one or more of the local parks.

Over the years, some of Dona’s most memorable projects and initiatives include working with the Orcas community to construct Stage on the Green in Eastsound; the renovation and expansion of facilities at Odlin Park on Lopez; acquisition of Shark Reef Sanctuary from DNR; working with the Terrestrial Managers Group to develop the Leave No Trace program in the San Juan Islands; supporting the work of many volunteers who have constructed trails, beach stairs, Odlin pavilion and more; working with the community to develop a vision for parks through parks, trails and natural areas planning, and for the fairgrounds through the master planning process; supporting staff production of the Fair; and in 2015 building a permanent home (office) for the Parks & Fair Department at the fairgrounds.

Dona says she’s “leaving the work in good hands.” She can’t say enough good things about her staff: Kathryn Hansen, Jennifer Allen, Adrienne Bourne, and Alice Hibberd in the office, all of whom work for both the parks and the fair; David St. George & Joe Ingman (Lopez), Toby Haskett & Luke Praschack (SJI), Katie McLane (Shaw) who perform the on-the-ground maintenance and management of the county parks, and Matt Waite who supports fairgrounds events and maintains the facilities.