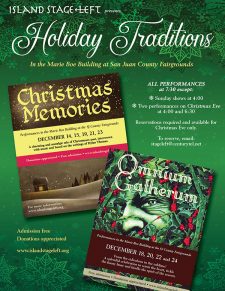 All shows at 7:30 EXCEPT: Sunday shows at 4pm, and December 24 shows at 4pm and 6:30 pm. Reservations required and available for December 24thonly: stageleft@centurytel.net
Free admission to all shows. Donations appreciated.

They’re both such popular shows, we thought since we didn’t have a Christmas show last year we would give people a chance to see both!

“Christmas Memories” takes the audience to a small town in Wales, and a child’s view of the winter world a hundred years ago.  It was our first holiday show in 2003 and soon became a favourite holiday tradition. This year’s show brings Penelope Haskew’s delightful singing voice to join Dan Mayes in music of the time, interwoven with the story. (December 14, 15, 19, 21, 23)

“Omnium Gatherum” is a different kettle of fish altogether;  “From the ridiculous to the sublime,” it’s full of unusual things that you don’t usually associate with a Christmas program. With plenty of laughter, joy and celebration, this has become our other tremendously popular other island tradition. (Shows December 18, 20, 22, 24)