February “Best Of The Fest” From Friday Harbor Film Festival 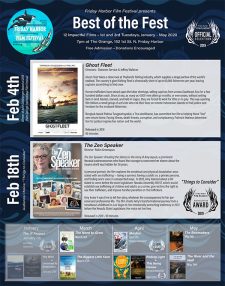 Friday Harbor Film Festival’s annual Best of the Fest series continues during February. Award-winning, impactful feature films and shorts from the 2019 Festival are being shown every first and third Tuesday from January through May at the Grange beginning at 7 pm. These screenings are free, although donations are encouraged.

Ghost Fleet takes a close look at Thailand’s fishing industry, which supplies a large portion of the world’s seafood. The country’s giant fishing fleet is chronically short of up to 60,000 fishermen per year, leaving captains scrambling to find crew.

Human traffickers have seized upon the labor shortage, selling captives from across Southeast Asia for a few hundred dollars each. Once at sea, as many as 4,000 men often go months, or even years, without setting foot on land. Beaten, starved, and held in cages, they are forced to work for little or no pay. This eye-opening film follows a small group of activists who risk their lives on remote Indonesian islands to find justice and freedom for the enslaved fishermen.

The Zen Speaker: Breaking the Silence is the story of Amy Ayoub, a prominent Nevada businesswoman who found the courage to overcome her shame about the trauma she’d kept hidden for 38 years. A personal portrait, the film explores the emotional and physical devastation associated with sex trafficking – being a survivor, having a public vs a private persona, and finding one’s voice in unexpected ways.

In 2012, Amy learned about a bill slated to come before the state legislature: Nevada Assembly Bill 67, which would establish sex trafficking of children and adults as a crime, give victims the right to sue their traffickers, and impose harsher penalties on the traffickers. Amy knew it was time to tell her story, whatever the consequences for her personal and professional life.

The film charts Amy’s transformational journey from a tumultuous childhood in Las Vegas to her emotionally wrenching testimony in 2013 before the Nevada State Legislature. Released in 2019. 99 minutes