For such a small island community way up in the northwest corner of the country, we have quite a few “Little Free Libraries”, at least 6 that we know of. Louise Dustrude shares this report on them…

Linda Thompson is a retired public librarian, and so her husband Gary’s gift to her for her 70th birthday was a Little Free Library – a charmingly decorated box with a front door and filled with books to be shared with anyone who looks inside. 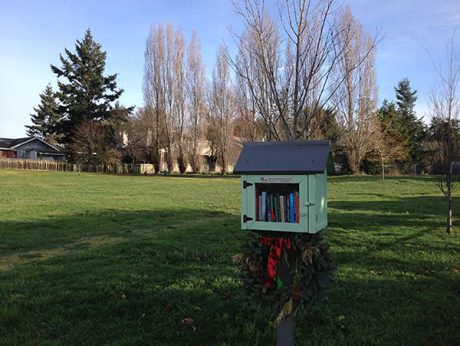 It’s been up since March of last year, in Greenway Park and right in front of their home.

She curates the books carefully and puts a souvenir bookmark inside each one.

My family gave me one in 2014, and our number is 14081. So the numbers are booming, showing the popularity of these symbols of neighborliness and sharing and the love of books. 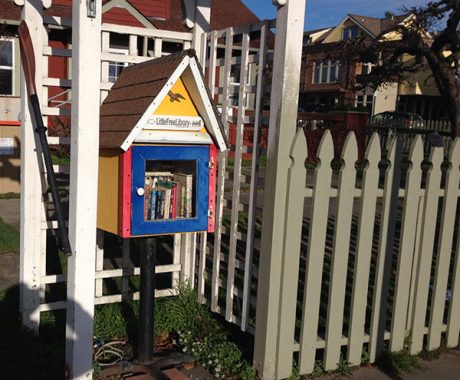 Ours is downtown, on the corner of A Street and Nichols, and was, I believe, the first on the island. We dedicated it with a short ceremony, where then-Mayor Carrie Lacher spoke. A public library employee, she said, “I’m not a real librarian, but I play one at work.”

You can watch the ceremony on this video: 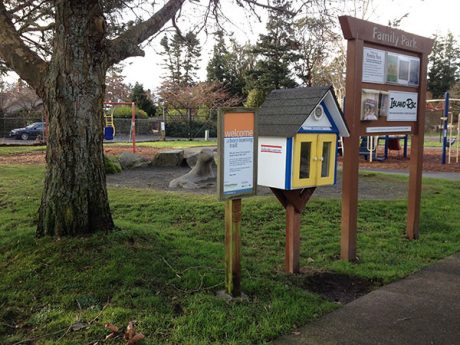 One is next to the children’s playground at the Fairgrounds, and is dedicated to books for children. 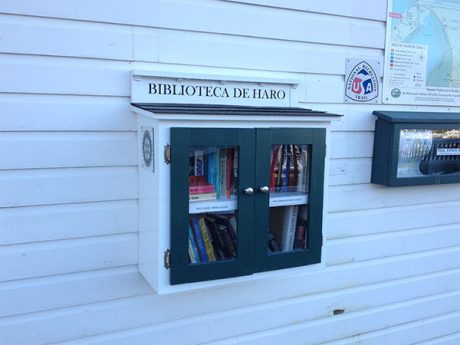 The other is at Roche Harbor Resort, and is primarily stocked with books for grownups. Members won’t say who built them, because Rotary emphasizes “service above self.” Rotary International is a partner with the national Little Free Library organization. 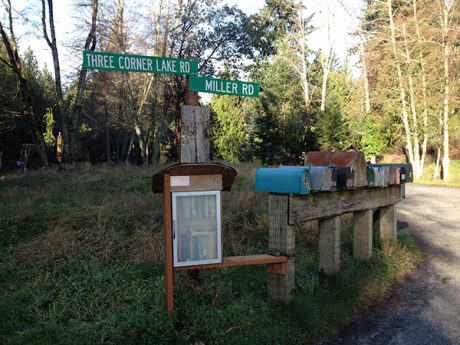 One of the more recent little libraries on the island is at the intersection of Miller Road and Three Corner Lake Road. Dick Barnes, the former tennis coach at the high school, built it to help dispense the books he collects at Community Treasures and elsewhere.

Dick has a long history with used bookstores, and once worked at one at 64 Charing Cross Road in London, just down the road from the famed 84 Charing Cross Road of book and movie fame. The one where he worked was known colloquially as “The Bomb Shop” because it was a Communist Party bookshop.

Now he fills in occasionally at Serendipity for owners Carol Jackson and Dilys Goodman, and he volunteers at Community Treasures, sorting through the enormous numbers of books they receive, and dispersing them one way or another throughout the community.

There is one other on the island, whose owner prefers to avoid publicity.

What do all these people have in common? They love books and want to share that love with everyone else.

In 2009 Todd Bol of Hudson, Wisconsin, built a model of a one-room schoolhouse. It was a tribute to his mother; she was a teacher who loved to read. He filled it with books and put it on a post in the front yard. The neighbors and friends loved it, so he built several more and gave them away.

Bol and a friend then conceived the idea of trying to build and place 2,501 little libraries around the country, one more than the public libraries funded in the 19th century by Andrew Carnegie.

There are now more than 90,000 official LFLs in 91 countries, not to mention the enormous numbers of others that don’t claim the title and never have signed in.

A few (maybe more than a few) people have copied the idea, building little free pantries to give away food, or in some cases pet food.

Do you need a book or two, or several? Go help yourself. And then when you feel like sharing put another book, or several, in a Little Free Library for others to enjoy.