Missing Mountain Road is Under Construction 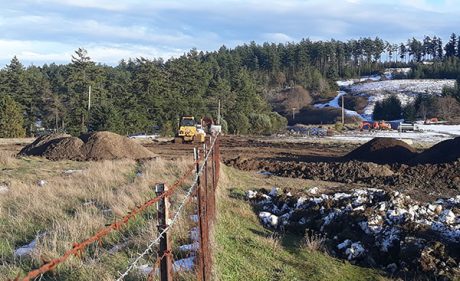 The road through the gravel pit connecting Turn Point Road and Pear Point Road is under construction, more than 10 years after it was formally agreed to. The county is fulfilling a commitment it made to the town in 2009.

It will be called Missing Mountain Road, alluding to the actual removal of a hill by gravel pit operations over many years.

It is expected to be completed by the middle of March. The contractor is Williamson Construction out of Deming.

The road will be 30 feet wide overall, with 11-foot lanes and four-foot shoulders, wider than either of the roads it connects.

It is taking the eastern portion of the gravel pit, and the perimeter walking trail there has been moved to the west to accommodate it.

After completion, county engineer Colin Huntemer will invite Island Rec members and others to walk with him and reach a consensus about where the trail should be placed. Huntemer feels it is difficult to envision where it should go until the road is in. The new trail and the fence between it and the new road will be built at county expense.

The county will at the same time fix the potholes on the Jackson Beach road.

Controversy over the road held it up until now. A number of groups supported it, and others opposed it. The town’s interest was in getting heavy traffic off Warbass, a very narrow one-way route to town which drops traffic right at the ferry loading lanes.

Heavy gravel trucks come in at the shipyard and head to various destinations on the island, but until now they have had to go through town. Now they will be able to take alternate routes.

Other traffic may also choose to take the alternate route and avoid the ferry parking area.

The San Juan Community Home Trust has been limited to 60 homes until the road was in place, and the neighboring property owned by the family of Carolyn Norman, Vincent Buck, and Jai Boreen has not been allowed to be developed until this road was constructed.

Once that property is developed, a trail – long sought by the San Juan Island Trails Committee – will be opened to connect the elementary school (and the rest of town) with the gravel pit and Jackson Beach. There is currently no safe, legal walking route through the area for school children and others.