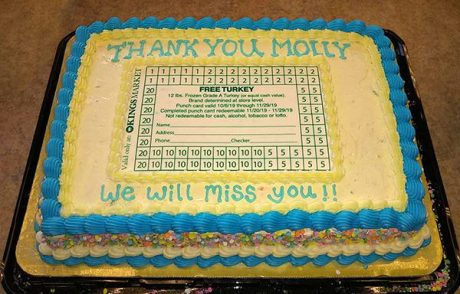 Molly Hogan’s last day at King’s Market Friday was full of celebration, as friends and customers came in to wish her well in her retirement. Her fellow employees gave her a colorful tiara, a sign to wear saying “I’m retiring today!!!” and a sheet cake decorated with a replica of the Turkey Cards she tired of dealing with over the years.

She had high praise for King’s owner Verne Howard. “Verne is a very kind and generous employer, one of the few who offers steady, year-round employment, vacation time, sick leave, and a good health-care package.”

She worked there for 23 years.

Molly worked at the movie theater for five or six years, running the front of the house, when it was owned by the Kinnaman family, just before starting at King’s. Today hers is the voice you hear when you call for movie times.

She has been a movie fan since she was a child. A foreign film series when she was in high school led to an appreciation of movies “other than Hollywood blockbusters.” She appreciates “good writing, good acting, good directing, good cinematography – but not special effects.” She likes European movies, “with a lot of close-ups of the face.”

She posts on a Facebook page, “At the movies with Molly,” but says, “I haven’t posted for about a year, but I will again now.”

A favorite activity is going to film festivals off-island, and she says she is “a big fan of the Orcas Island Film Festival” held every year in October.

She has also earned part of her living from buying and selling. She says “I’ve been collecting things for a long time, and now I’m beginning to sell some of them.” An example is Corning Ware some of which she has owned for years and which is now becoming very popular. She sells through the app Mercari (similar to eBay, she says, but easier to use; and through a flea market space on the mainland near Sharpe’s Corner.

She and her friend Sara Bauer will display vintage Pyrex at the library next month, and she recently showed her collection of vintage teapots from the ‘30s and ‘40s there. She plans to start listing them for sale soon.

In February the senior class at the high school is holding a rummage sale, and Molly has been “putting things in a box” for that sale. She says “I’ll be doing more of that. I like it a lot.”

This talent runs in her family, apparently. She has a brother in Seattle who with his husband has been buying and selling such items for years, and “earns enough each year for a great vacation.”

Molly has also mixed up her own brand of granola, “Housing Crunch,” which she sells at the food co-op; she gives a portion of the profits to the San Juan Community Home Trust. She owns her own home in the Home Trust’s Salal neighborhood.

She looks forward to visiting with her four grown children and three grandchildren. They are scattered around, in Seattle, White Salmon, Ennis, Montana, and San Francisco. But she has no plans to move, although she “would love to eliminate the ferry.”