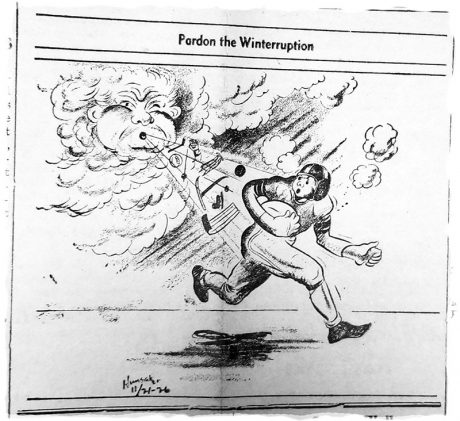 When this editorial cartoon appeared in the November 24, 1949 issue of the Friday Harbor Journal, no one could have foreseen what was to come. It heralded the beginning of one doozy of a severe winter from Old Man Winter or more scientifically, a historic series of arctic blasts of snow and wind.

By December, snowfall and freezing roads had caused the postponement of some island events. When school let out for the Christmas holiday, it was the beginning of several weeks of extended closure as each new storm clobbered the islands. A New Year’s Day blizzard spread to most of northwestern Washington, while on San Juan Island it was the start of week after week of temperatures stuck in the twenties, dipping down into the teens and below overnight.

This memorable winter was brought up during the “Old Islanders Tell It All” event at the San Juan Island Library recently. Mary Jane Anderson remembered that school was closed for nearly two months by snow storms and impassable roads. Ponds froze over, inviting fun sliding or skating, and a few adventuresome drivers took cars for a spin atop the ice.

January 13, 1950 – Friday the 13th – went down as one of the worst days for extreme weather in western Washington history. The San Juans were not spared from the blizzard’s fury. It seems no place in Washington state was. Hurricane force winds were recorded in several areas of the region and the snow just kept falling…and blowing. Friday Harbor recorded an official low of eight degrees on that day, although some interior locations on the island reported lows of zero degrees.

As reported in the January 19 edition of the Friday Harbor Journal, the blizzard caused extensive damage on the island. At least nine small boats sank in Friday Harbor. Power and telephone lines were downed by falling trees. Almost everyone experienced frozen pipes. In some homes, frozen water pipes forced bathroom fixtures from the walls. It was one of the worst blizzards to strike San Juan Island in its recorded history. Yet the ferries still ran, although understandably off schedule, mail was faithfully delivered by boats and planes, and lineman braved the elements to restore power to homes and businesses.

“How I hate going out in the storm…”

What made these particular storms of 1950 so severe? It was a rare combination of arctic winds howling down through the Fraser River Valley, pushing through British Columbia to the U.S. and then colliding with a separate wet storm blowing in on a path from the Pacific Ocean and the Strait of Juan de Fuca. It was a fierce battle of weather forces over land and sea. Timing is everything in weather. A perfect storm of storms, one might say.

“It doesn’t show signs of stopping…”

January was a month marked by snow drifts, iced over roads, and wind. A warm front promised the state for January 29 did not happen when the front went offshore. But the San Juans did thaw a bit and island schools were able to open on Monday, January 30 after an unsuccessful attempt to open the previous Monday. As reported in the February 2 issue of the Friday Harbor Journal, “The children as well as the adults are tired of the winter and many of the students expressed the desire to return to their school work.” The Seattle Times reported in the same week that “Last month apparently was designed to make the old settlers forget all about the big winters of 1916 and 1893.” Then it snowed much of February.

As we would say today, “It was epic!”. We did not have a good photo to go with this story, so if you have snow photos taken on the island during the winter of 1949-1950, please let us know at the San Juan Historical Museum. We can digitize them for our archives and illustrate this historic winter.