A 1912 Valentine’s Party at the Grange 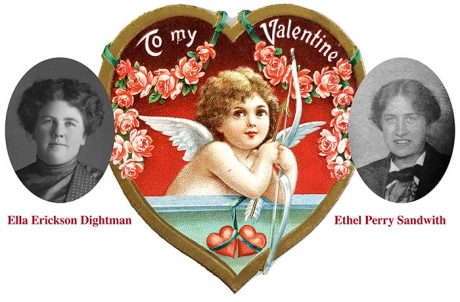 Since February is a month known for Valentine’s Day decorations in store windows and rows of sweetheart cards for sale, we thought we would see what has been preserved in the San Juan Historical Museum’s archives from festive holidays of yesteryear.

The classic card pictured here is among the many sweetheart and friendship cards in the collection. Unfortunately, we do not know its provenance; that is its history…who owned it or its origin. Museums have “olden days” themselves, when records and notations can be sparse or faded.

In the past, donated memorabilia and objects have been left on the Museum’s porch, without a donor’s name or any sign of original ownership. This sweet card may have been from one of those mystery boxes.

But we do know some interesting details about a Valentine’s Day party given at the Grange in 1912. An invitation was published as a news item in the San Juan Islander newspaper on February 9 of that year.

On Valentine’s night, Mrs. Warren Dightman, Miss Ann Taylor and Miss Ethel Perry will entertain the Grangers and their invited guests at one of the most charming parties that has ever been given. All members will receive an invitation which they are requested to send to the one whom they wish to invite, and the guest will please bring the card on the night.

With this same little card,
One friend you invite.
And return it to us
On Valentine’s night:
Grange hall, Feb. 14, 8 p.m.

Mrs. Warren Dightman was Ella Erickson (1879-1970), daughter of Erick Erickson and Isabella McKenzie. Ella was a 1908 charter member of Friday Harbor Grange #225. Miss Ann Taylor (1876-1938) was the daughter of John and Victoria LaPlante Taylor. Ann was also a charter member of this Grange. Ethel Perry (1891-1980) was the daughter of Park and Laura Baker Perry. Ethel later married Colin Sandwith. Ella and Ethel are pictured above, but a photograph of Ann was not available. If you have a photo of Ann Taylor to share, please contact the Historical Museum.

In researching this little story, the most time spent was in trying to determine the exact location of this Valentine’s Day party. Friday Harbor Grange did not have its own hall, but met in several different locations. Sometimes members’ homes were used and other times, space was rented “above the pool hall” or in another commercial building with a large, open-space room on the second floor. Sometimes, Grange events were held on the first floor of the Odd Fellows Hall. A careful search in archived newspapers did narrow down possibilities and ultimately identified the location of the 1912 Valentine’s Day party: It was held on the second floor of a building which once stood at the corner of Spring and Second Streets, where Kings Market is located today. In 1912, the wooden building occupying that corner was known as “the Jensen property.” A large building that was situated there had recently been partitioned into sections in order to lease out to various businesses. One was a dance hall and the room above it had been “fitted up for the Friday Harbor Grange.”

One last clarifying note is in order. Friday Harbor Grange #225, chartered in 1908 and important to this story, is a different Grange organization from San Juan Island Grange #966, chartered much later in 1931. San Juan Island Grange owns what we refer to simply as “The Grange Hall” on First Street, which they have called home since 1955 (when it was owned by the Women’s Study Club) and have owned it themselves since 1975. Friday Harbor Grange, on the other hand, disbanded in 1921 and became active again when it was re-organized in 2012.

History is sometimes preserved in bits and pieces, to be woven together in a future story, such as this one. If you have small pieces of a story, there are most likely other pieces to the same story to be found at the San Juan Historical Museum. Please let us know if you have something to share, won’t you?