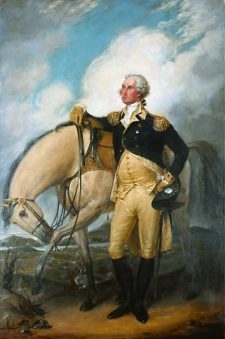 There will be no lunch served at the Mullis Center on Monday. Presidents Day is a federal holiday; banks and the post office are also closed. Before the Uniform Federal Holidays act of 1971 we observed Abraham Lincoln’s birthday February 12 and George Washington’s birthday on February 22. Making the third Monday in February Presidents Day honors all of our presidents and gives us a 3-day weekend.

You may think of Washington’s birthday as little more than the traditional time to start planting peas but as we approach another presidential election let’s take a look at the man who was our first president.

First, there is the myth about the cherry tree, which could be true, Washington grew up on a farm, but true or not the story has become part of our national mythology.

Young George was given a hatchet for his sixth birthday. Anxious to try it out he chopped down a cherry tree. His father was not happy and asked George what happened. Young George famously answered, “I can not tell a lie Pa, I cut down the cherry tree.” His father was so proud of his son for telling the truth that he forgave him for cutting down the tree. This is why we eat cherry pie on Washington’s birthday and value truth telling in our leaders perhaps especially after they’ve made a mistake.

George Washington was not a perfect man.  He owned slaves knowing it was wrong and only freed them in his will after his death. He was not as educated as many of his compatriots but he was modest enough to surround himself with men who knew more than he did as advisors. He was both a rugged frontiersman who traveled the country on horseback as well as an eighteenth century gentleman who gained the respect of European heads of State. He was a unifier who worked hard to unite diverse former colonies into one great nation.

As a general in the army he did not sit back from the fray but fought alongside his men. As a president, he was very popular and could have easily seized power for himself but instead he served two terms and then set the mold for our peaceful transition of power.  His presidency is worth celebrating.

Link to: The History of President’s Day