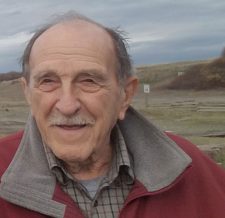 On May 21, 2020 Marshall Phillip Sanborn, age 91, died peacefully at his home on San Juan Island, WA with his wife, Beth Helstien, at his side. Despite declining health due to COPD, heart disease, and cancer Marshall was active and vibrant until shortly before he died.

Born in 1928 in Longmont CO to Kent and Edna Sanborn, Marshall grew up during the Great Depression and World War II. In 1945 after graduating from Longmont High School, Marshall enlisted in the US Army and served as a medic in Germany during 1945-47. He returned home to attend Colorado State College of Education in Greely from which he graduated in 1950 with a degree in English Education. In 1951 he married Helen Houg of St Ansgar IA and moved to Gering NE where he taught high school English. The following year he worked on a turkey farm.

Marshall and Helen moved to Steamboat Springs CO in 1953 where he taught high school English, was the guidance counselor, drove a school bus, directed the school plays, and worked summers guiding horseback camping trips into the high country around Steamboat. He designed and help build the Lutheran Church there. During this time, Marshall also earned a Master’s Degree in Guidance and Counseling from Northern Iowa State Teacher’s College in 1960. In 1960 Marshall, Helen, and sons Steve, Mark, and Stu moved to Iowa City IA where he studied for PhD at the University of Iowa. While a full-time graduate student, Marshall worked as a gas station mechanic and at a picture frame plant to support his family.

Upon earning his PhD in 1963, Marshall and family moved to Madison WI where he was professor of Guidance and Counseling at the University of Wisconsin. At UW from 1963-1979, he served as co-director of the Laboratory for Superior Students, published many scholarly articles and book chapters, advised MS and PhD graduate students, and served as Chairman of the Department of Guidance and Counseling.

Marshall left his academic career and UW in 1979 and moved to San Juan Island WA with his second wife, Sara (Sally) Eaton. On San Juan Island, Marshall worked at a fish processing plant and on a sheep farm while using his carpentry skills to build a home for he, Sara, and their daughter Bonnie, born in 1982. In 1995 Marshall married again, this time to Beth Helstien of Friday Harbor WA.

Over his forty-plus years on San Juan Island, Marshall was involved with the community; he worked for San Juan County in land use permitting. He may be the only human to have ever walked the perimeter of San Juan Island; he completed the first shoreline inventory tackling wet, chest-high salal and Himalayan blackberry, and he discovered numerous Native American prehistoric burial sites. He authored several papers in archaeology and participated in field work and repatriation of artifacts from sites around the San Juan Islands.

He helped establish Island Rec–the San Juan Island Park and Recreation District, and served 12 years on the San Juan Island School District Board. He worked to renovate the middle school and purchase the land that is now the Linde playing fields. He built sets for community theater, co-founded the Courthouse employees union, cleaned the bathrooms at Spring Street International School, and advocated for the public good. By crafting a clear explanation of it, he helped establish the San Juan County Land Bank.

Throughout his working life and following his retirement in 1993, Marshall made time for many hobbies, riding and restoring BMW motorcycles, fly fishing, family history, carpentry, reading, and visiting with his many friends at American Legion Post 163 in Friday Harbor. He was preceded in death by siblings Betty Snow, Mary Barber, Kent Sanborn, and Paul Sanborn, and his second wife, Sara Eaton. He is survived by his first wife Helen Sanborn, third wife Beth Helstien, children Steve, Mark, Stuart, and Bonnie, grandchildren, Marshall, Kaitlyn, Amanda, Austin, Kyle, Samantha, and Nick, and great-granddaughter, Aurora.   A memorial service is scheduled for August 29 in Friday Harbor WA. Donations may be made in Marshall’s memory to: