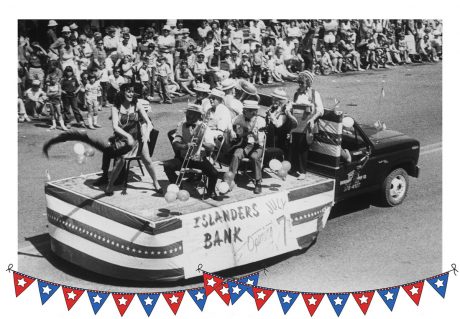 Without a parade this year, we’ve been thinking of festive 4th of July celebrations from years past. Here is a photo from the 1981 parade, shining the spotlight of history on the Islanders Bank float that year. It’s tradition for Islanders Bank to enter a float in the parade, and this one was noteworthy because it was their first one. The new Islanders Bank would open just a few days later on July 7, as noted on the float’s sign. This much we know. There is so much more that we would like to know.

Who are the people on the float? Do you recognize yourself? Who reading this column was working for Islanders Bank that first year? Please let us know in the comments. You are part of the story.

Islanders Bank, as many people know, has not always been located at its present location at 225 Blair Street. In 1981, the Friday Harbor branch was opened in an existing building located at 174 First Street North, next to the Grange Hall. We know this building now as the location of the Cannery Inn.

Here are some other things of interest about the 1981 festivities. The San Juan Island Chamber of Commerce called it the “Second Annual Glorious Old-Fashioned 4th of July!” and honored these entries with awards:

In addition to floats, entries included antique cars and Disney characters. Although not mentioned in newspaper articles, there most certainly would have been equestrian entries and more music.

The Chamber also sponsored other 4th of July events in 1981. The day began early with a fun run in town and a bike race to Roche Harbor. A music fest and picnic in Sunken Park followed the parade, while an open-air market and art festival were set up along Spring Street. There were dinghy races in the harbor and in the evening, a dance at the fairgrounds and fireworks over the harbor. General Chairman Paul Dossett and many other volunteers had one busy day.

If you participated in any of the events that day, please contact us at the San Juan Historical Museum or leave a comment below. However you celebrate our country’s Independence Day in these unique times during the year of 2020, we wish you all a happy and safe holiday.