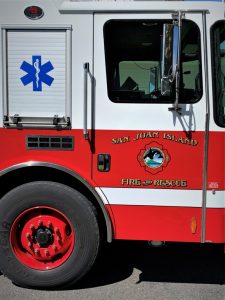 On Thursday afternoon, August 13, 2020, emergency responders from San Juan Island Fire and Rescue, San Juan Island EMS, and Airlift NW responded to a 911 emergency call reporting an unconscious person who was not breathing at the Roche Harbor Marina.

Several bystanders at the scene immediately went to the individual needing help and began Cardiopulmonary Resuscitation (CPR). At the same time, a citizen immediately called 911 and maintained communication between the 911 center and the citizen responders.

Dr Joshua Corsa, San Juan County Medical Program Director, commented, “Medical care is a team effort that starts when a person falls ill. Willing and able good Samaritans are a critical part of that team. These Samaritans are often the first, and most critical, link in a patient’s chain of survival. Their actions demonstrate that anybody, with as little as two hours of training, can save a life.”

The patient was resuscitated following CPR and three electrical shocks provided by an Automatic External Defibrillator (AED) obtained from the Lime Kiln Café on site. The patient regained consciousness and was immediately moved to the Roche Harbor airfield, where an arriving Airlift Northwest helicopter and crew transported the patient to a regional hospital.

“We are grateful for the fast action taken by citizens and the staff of the Roche Harbor Resort. Their quick action, coupled with the presence of an AED and excellent communication with San Juan County 911 center made this rescue possible,” said SJIF&R Chief Norvin Collins. Dr Corsa added, “I am extremely proud of the fact that San Juan County has some of the highest cardiac arrest survival rates in the world. This is thanks to the efforts of concerned bystanders, early access to defibrillators, and the hard work of our dispatchers, firefighters, deputies, EMTs, and paramedics.”

In an emergency, immediately calling 911 and remaining on the line until emergency responders arrive is also a critical step in saving someone’s life. This life-saving event demonstrates how important it is for everyone to learn CPR. For more information about classes, or to learn about volunteer opportunities, please contact San Juan Island EMS, San Juan Island Fire & Rescue, or the closest emergency response/training agency.