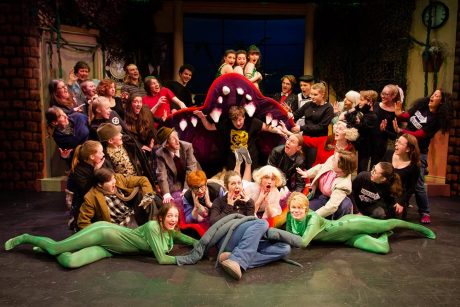 After months of quarantined waiting, the Friday Harbor High School Thespians’ production of Little Shop of Horrors has heard back from their adjudication with the 5th Avenue Theatre for the High School Musical Theatre Awards. The awards show got cancelled this year due to the pandemic, also cancelling the actual nominations and awards ceremony. Nevertheless, the feedback from the 5th Avenue can truly be summarized as: “They loved us!”

“Fantastic show! I don’t think of Little Shop as a dance show, but you changed my mind by incorporating movement in such creative ways!”

“A wonderful production! You took a show I’ve seen countless times and did fresh new things with it. This was one of those productions where I felt like across the board the cast, crew, designers, directors, etc. had all come together on a cohesive vision, and the final product was full of excitement and stakes that swept the audience along. What a great program you’re building here!”

Although unable to announce nominations for awards, the 5th Avenue Theatre did recognize students who achieved the “You Hit The High Note!” recognition, reflecting a combined score of 90% or higher from their evaluators. In a traditional awards season, these students then would have been up for nominations, awards, and further recognition. Even without the awards, they can now cite this achievement on their resumes, biographies, college applications, and the like.

The Friday Harbor High School Thespians are proud and ecstatic to announce the following students “Hit The High Note!”

“Wow! What a powerhouse performance!… Thank you for performing with passion and stakes, you were amazing in this role! So poised and professional onstage.”

“Great work giving us a really defined arc as Seymour… I really liked that this Seymour approached the role from a real place of humanity… A very nice and grounded interpretation of this role.”

“The stage manager should be commended for beautifully calling the cues so they were timed cleanly with beats and transitions. For the deck crew – a really clean show as well! Mic cues were clean and the tracks were nicely balanced with the voices. Everyone looked great onstage, so the backstage crew was doing a good job with wardrobe and make-up duties.”

Congratulations to the entire cast and crew of Little Shop of Horrors! The awards show may not have gone on, but the praise and recognition you received, from your evaluators and audience alike, truly speak to the powerhouse and talent of the Friday Harbor High School Thespians!