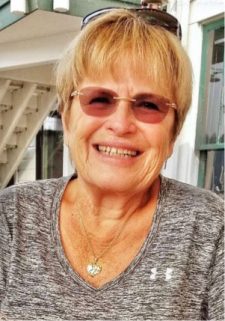 Loretta (Laurie) Irene Wangenheim-Brown from Friday Harbor Washington passed away on September 6, 2020. Laurie was born on February 11, 1942 and was immediately adopted by Bob and Helen Jones. Growing up surrounded by a loving family and all kinds of farm animals in Riverside Washington began a life-long love of nature and exploring.

Laurie graduated as Class Valedictorian from Omak High School in 1960. While in High School Laurie was selected to be the Omak Stampede Queen due to both her good looks and excellent horse showmanship. In addition, she was also a member of the local dance band, playing the Saxophone. Upon Graduation, Laurie spent the next two years attending the University of Washington. It was there that she met and married her first husband and moved to San Francisco.

While living there, she gave birth to her daughter Tracee. The family’s travels then took them to Los Angeles California and while in Los Angeles, Laurie had the opportunity to work in Hollywood at Glen Glenn Sound Company. She always referred to that job, working with Hollywood movie stars, as one of her favorite experiences. In Los Angeles, Laurie continued to pursue her adventures. There were many opportunities for boating, sailing, scuba diving, trips to Catalina and lots of horseback riding. Laurie also volunteered her time for Sea Turtle Rescue. A service that would take her to visit many different countries over the years.

Laurie and the family also lived in Lake Tahoe, Nevada. She worked in Real Estate sales and during this time, divorced Tracee’s father while continuing to provide for herself and her daughter. Laurie met and married Merv Wangenheim and they worked together in his financial business up until Merv’s passing. It was during their down time that they enjoyed sailing and staying in the San Juan Islands. Laurie had found her comfort place and they moved to Friday Harbor in 1987.

After Merv’s death, Laurie worked at Browne’s Nursery and continued her love of plants and all things in nature. Her favorite “friends” were Hummingbirds. Laurie joined the San Juan Lion’s Club and became the head of the Sight and Sound Committee, which provided eyeglasses and hearing aids to anyone in need. Laurie also served as Chairperson of the Annual Shopping Spree, in addition to the Fourth of July Kielbasa Burn and the Fourth of July Parade. She also spent time as the Club Director.

In 2010, after many years of living her independent and adventurous lifestyle, Laurie began dating Brian Brown. They were married on the Island of Kauai on January 22, 2013. Through Brian, Laurie had found a kindred spirit and they continued their love of travel, visiting Kenya Africa, Belize, many trips to Hawaii, Mexico and travels up and down the West Coast. Laurie is survived by Brian, and his children, Gene, Theresa, Daniel and their families and her daughter Tracee, Son-in-Law Jerry and two grandchildren, Alyxandra and Harrison.

Celebration of life will be held in the near future.