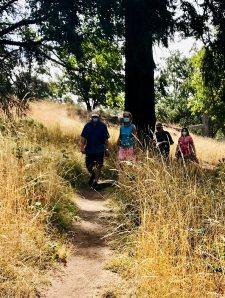 What a great time to be exploring our trails. Covid seems to have made us all more aware of the healing power of nature and our fortunate ability to be part of it. As summer is waning, fall colors are taking over for the vibrancy of spring and early summer. But hiking at any season just means a different part of nature’s display we can enjoy.

Here’s an apt poem by Richard Hovey written in 1898, but equally true today, especially perhaps as we glimpse a red-tailed hawk or bald eagle among these hills.

This roughly one-mile hike begins in English Camp and ends at the boundary of Mitchell Hill. You will be traveling close to the original Old Military Road which connected English Camp to American Camp during the boundary dispute known as the Pig War, 1859 to 1872. Known first as the Cowichan Road, named after some Vancouver Island native road crew, it first connected many of the Hudson Bay sheep farms, then was enlarged to become the vital communication link between the two disputing nations and important bi-way to island settlement.

It is the vision of the Old Military Road Trail (OMRT) Committee to connect once again these two Camps, now National Parks, using trails already existing and creating new trails through public lands and granted easements. 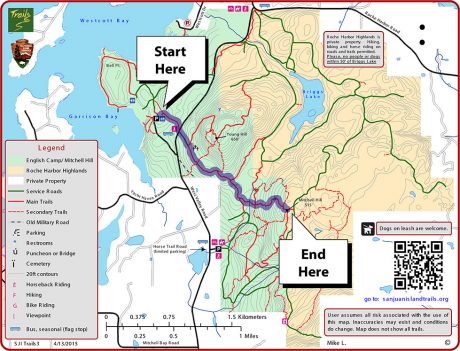 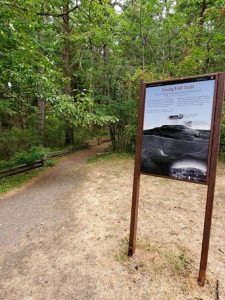 One can use the map to continue on the many Mitchell Hill hikes or up to Young Hill so a loop can be made. One can also begin the hike by parking along West Valley Road.

Above the restrooms you’ll see the entrance to the Young Hill trail.

A gentle grade and shady trail leads up to West Valley Road. Safely continue across the road to the entrance to the trail. You’ll find a helpful kiosk and a densely packed forest of Douglas fir trees. The understory vegetation is very limited as these youngish trees block out light and space. Repeated logging creates many of these more monoculture forests. The original diverse habitat of mature firs and cedars mixed with Garry Oak were certainly attractive assets for the building of English Camp. 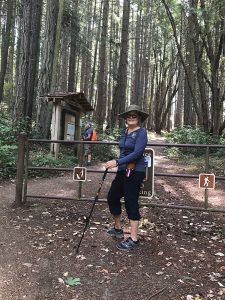 Just short of 200 yards up the trail is our turn off on the Mitchell Hill Connector Trail but hike just a bit further up the main trail to the turnoff to the English Camp Cemetery. Note that the British soldiers buried here died from some tragic accidents and not from the dispute; the only blood shed in the “Pig War” was the Pig!

At the cemetery take time out to read the plaque about the Garry Oak Revival and enjoy the oaks beyond. Garry Oaks were named in 1822 after Nicholas Garry, former governor of the Hudson’s Bay Company. These gnarled beauties are the only oaks native to Washington, though their range extends from Southern Canada to Northern California.

Hike back down to the Mitchell Hill turnoff and continue south. These oaken forests were once sustained with controlled burns by the native Salish to improve their hunting grounds. Garry Oaks also have edible acorns if steamed, roasted or boiled for a long time, but they were not the favored food of the Salish if the less bitter Camas bulbs were available. 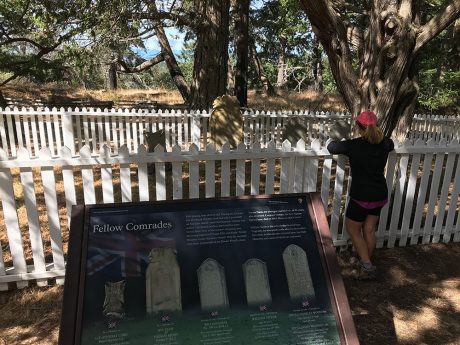 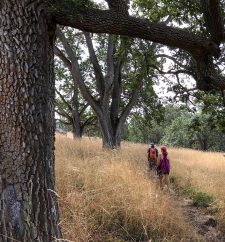 You will also be passing evidence of the National Parks own prescribed burns as they attempt to renew the Garry Oak Prairie. As long as the inner layer of bark, the cambrium, is not destroyed, many trees, like redwoods with a foot deep of bark, can survive. Douglas Fir, with a thinner bark, are more susceptible.

Amid dry grasses the bracken ferns are starting to brown and snowberry is festooned with its’ poisonous white berries, called “corpse berry”by native tribes. Along the trail also look for Oregon Grape. Natives relished the berries and ate them raw, cooked or mashed then boiled to mix with other less sour fruit like salal or huckle berries. When cooked and dried the cakes made a nutritious treat during celbrations or dreary winters. 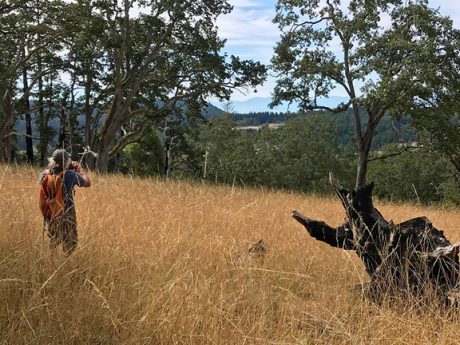 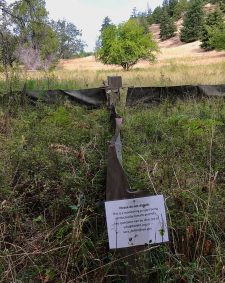 Check out the peakaboo views of the Olympics. Between you and West Valley Road was the Old Military Road, making one wish we could still hear the hoofbeats as the men of both sides rode to communicate important missives with one another or enjoy more fun events like racing their horses on the plains at American Camp.

Just up the trail a structure might arouse your curiosity. This strange looking contraption is the result of the National Park, Kwiaht and high school students joining together to monitor animal life in this area. Please do not disturb the site.

Kwiaht is the center for the historical ecology of the Salish Sea.They wish to preserve the living legacy of island wildlife and plants for future generations. For more information contact kwiaht.org  (http://kwaiaht.org)

All along the trail, especially in older firs check out the multitude of almost rectangular shaped woodpecker holes. These are made by Pilated Woodpeckers, Woody Woodpecker lookalikes, as they search for food. The holes then provide homes for a wide variety of bird and animal life. 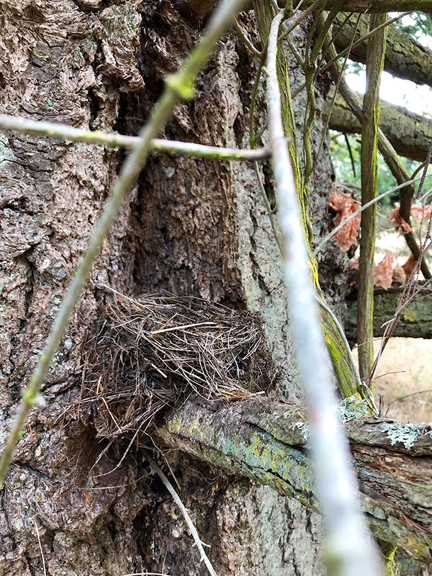