Island Senior: Tips From the Blue Zones For Hearty Longevity 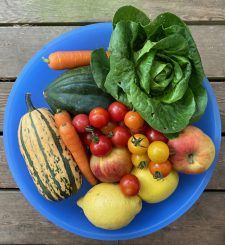 Ingredients for a plant based diet – photo Peggy Sue McRae

The concept of “blue zones” grew out of a demographic study identifying Sardina, Italy as a region with a high concentration of centenarians. Researchers who drew concentric blue circles on maps highlighting villages of extreme longevity began to refer to the regions within the blue circles as “blue zones”.

Buettner and his team studied these communities and identified qualities they have in common. They are not especially wealthy communities; in fact most live modestly perhaps with several generations under one roof.  They are all physically active and incorporate rest, social time, and spiritual uplift into their lives. They eat plant-based diets, lots of beans, and most of them drink wine.

In Sardina, while the farmers reach an average Italian life span, it is the shepherds who live the longest lives. They spend their days walking out with their flocks; they take lunch breaks and naps, and by five o’clock are in the village drinking wine with their friends. Their Mediterranean style diet includes pecorino cheese made from the milk of grass fed sheep that contains high levels of omega-3 fatty acids.

The Mediterranean diet is also a factor in the longevity of the residents in Ikaria, Greece. Says Buettner, “what set it apart from other places in the region was its emphasis on potatoes, goat’s milk, honey, legumes (especially garbanzo beans, black-eyed peas, and lentils), wild greens, some fruit and relatively small amounts of fish.” As long as they live, often into their 100s, these hearty folk do not suffer from dementia.

In Nicoya Costa Rica they work hard but also know how to relax, most often with family around meals based on corn, squash, and beans plus huge amounts of tropical fruit. Here elders are not only treated with respect, they are expected to contribute. Whether their contribution is cooking or childcare it provides them with a “Plan di Vida” or purpose, another universal factor in longevity. The same is true in Okinawa where a 99 year old will go out daily to catch fish for his grandchildren.

The Okinawans have a tradition called the moai. At five years old children are ceremonially placed in a small group with other five year olds called their moai. The moai will continue as a support group for them for the rest of their lives. Through sharing both their good fortunes as well as support during hard times these groups provide a valuable social safety net. For a long happy life Okinawans recommend eating something from the land and something from the sea every day. 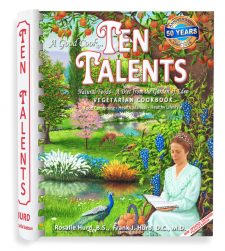 Some of you probably remember the Ten Talents cookbook. First published in 1968 it became a popular resource among counter-culture vegetarians. The cookbook promotes a whole food vegetarian diet in keeping with the teachings of the Seventh-day Adventist Church, teachings that help put Loma Linda, California, just 80 miles southeast of LA, on the blue zones longevity map. Loma Linda is home to the world’s largest population of Seventh-day Adventists. Besides the whole food diet other factors contributing to the long lives of this group include taking the Sabbath seriously by setting aside 24 hours every week for community, family, church, and nature walks.

Take a walk, take a nap, share some pecorino cheese and red wine with your friends. Don’t forget to eat plenty of greens and beans and you just may live a longer and happier life.

Link to: The Blue Zones