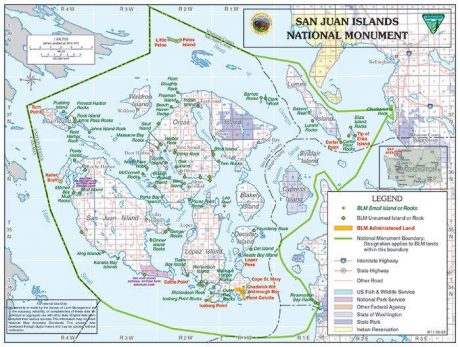 By the Bureau of Land Management

The Bureau of Land Management announced that it is seeking public nominations to the San Juan Islands National Monument Advisory Committee.

This citizen-based committee assists in the development of recommendations that address public land management issues.

The MAC, which is formally chartered under the Federal Advisory Committee Act and the Federal Policy and Land Management Act, provides advice and recommendations to the BLM on the development of the monument’s management plan in accordance with the statutes under which it was established.

“The MAC is an important forum for the community conversation that is a key component of public land management,” said Spokane Associate District Manager Michelle Brown. “By ensuring that representation reflects a variety of perspectives, MAC members provide a valuable service to the Bureau by helping to shape the Monument’s resource management plan.”

The MAC demonstrates that consensus-driven recommendations often lead to sustainable outcomes that benefit long-term public land planning and management of the San Juan Islands National Monument. The MAC consists of 12 members that represent unique site-specific interests as defined in the Federal Register notice under the heading “Supplementary Information.”

The six current and future vacancies that need to be filled with this call for nomination are for representatives of Outdoor Recreation/Tourism interests, Local Government, Tribal Communities, Cultural/Heritage, Environment/Wildlife and the Public at Large.

Individuals may nominate themselves or others to serve on the MAC. Nominees, who must be residents of Washington, will be reviewed based on their training, education and knowledge of the San Juan Islands.

Nominees should also demonstrate a commitment to consensus building and collaborative decision-making. All nominations from represented interests or organizations must include a completed application, letters of reference and any other information that speaks to the nominee’s qualifications.

As published in a notice in the Federal Register, the BLM will consider nominations until Nov. 13, 2020. The complete and signed application package must be postmarked or emailed on or before that date.

The BLM manages more than 245 million acres of public land located primarily in 12 Western states, including Alaska. The BLM also administers 700 million acres of sub-surface mineral estate throughout the nation. In fiscal year 2018, the diverse activities authorized on BLM-managed lands generated $105 billion in economic output across the country. This economic activity supported 471,000 jobs and contributed substantial revenue to the U.S. Treasury and state governments, mostly through royalties on minerals.