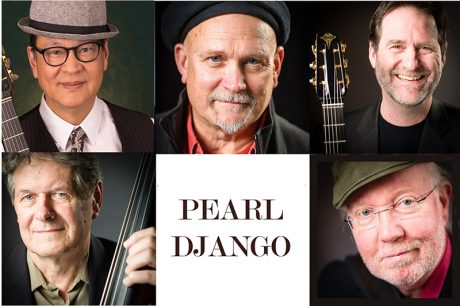 For two weeks only, at sjctheatre.org, you can see a special concert by Pearl Django. Regulars on the San Juan Community Theatre stage, Pearl Django filmed a concert for SJCT that will be streamed on our website from Nov. 12- 29.

With a performance history spanning more than 26 years, Pearl Django endures as one of the most highly regarded “hot club” style groups working today.

Although the band’s roots are firmly in the music made famous by Django Reinhardt and Stephane Grappelli, its extensive repertoire includes traditional jazz classics and original compositions.

Pearl Django has performed at festivals, dances and nightspots throughout the U.S. and abroad. They have played at the prestigious Festival Django Reinhardt in Samois sur Seine and have been featured on NPR’s “All Things Considered.”

The band’s signature style is marked by pristine and dexterous string work, colors of Bal Musette, the steady pulse of rhythm guitar and an unmistakable swing that delights audiences of all musical sensibilities. Throughout the years, Pearl Django has cultivated a devoted and enthusiastic following and they continue to play to packed houses wherever they perform.

Don’t miss this incredible concert, live in your home!