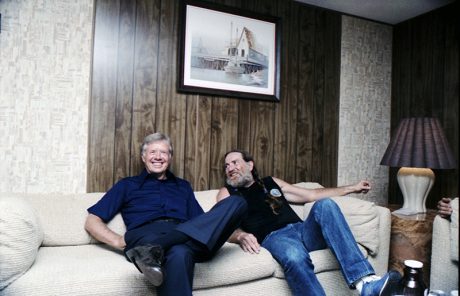 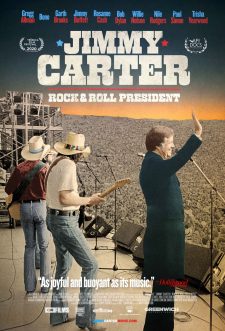 “Jimmy Carter: Rock & Roll President” will screen on-demand from Sunday, Nov. 15 through Monday, Nov. 30. It opens the “Best of the Fest” series, offering films during each of the coming months.  Read full details and purchase tickets ($8.50) at www.fhff.org.

This remarkable documentary charts the mostly forgotten story of how Carter, a lover of all types of music, forged a tight bond with musicians Willie Nelson, the Allman Brothers, Bob Dylan and others.

It is an incisive and often-rollicking look at an era that saw youth culture and politics join forces, and at a man of conscience whose love of music was crucial to who he was as a father, a citizen, a man of the South, and a leader during his presidency and beyond.

It was conceived by producer Chris Farrell and directed by Mary Wharton.

“We wanted to make something fun that could appeal to a broad audience,” said Wharton. “This is a hybrid: A straight-up music documentary about an important politician. We’re utilizing the form of a music doc and using that as our touchstone. Yet throughout the film, you do learn who Carter is as a man by seeing how music threads through his life.” Adds Farrell, “We didn’t want to do just a dry political film. If we can attract people with music and then they walk out aware of certain things they didn’t know — and they had fun in the process — then we did our job.”

Since leaving office, Carter’s work with The Carter Center and collaboration with Habitat for Humanity (through the Jimmy & Rosalynn Carter Work Project) have been instrumental in alleviating homelessness; treating preventable diseases including Guinea Worm and malaria; and promoting equality and diplomacy. In the film, we see his involvement with these causes and others sparking the same kind of excitement and enthusiasm that hanging out with music superstars did in the years he was elected president.

Says Farrell, “Jim Free, the former Special Assistant to the President who’s interviewed for the film, says that he often tells people, ‘If you like what Jimmy Carter has done since he left office, well, when he was President, he was all about doing the same things — making people’s lives better.’”