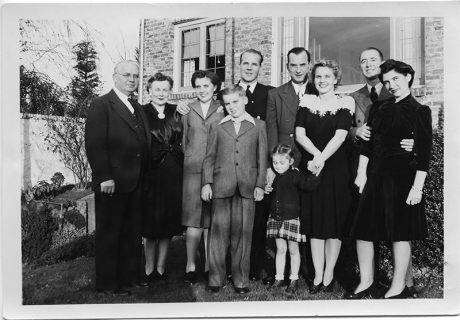 Sometimes researching local history is about documenting popular stories, and sometimes it’s about correcting what has been recorded in the past about those stories.

Each step along the way, we at the San Juan Historical Society and Museum are grateful for so many people and resources which make it possible to preserve and share our island stories.

We are thankful for those who share their family photos, for those who help us identify “mystery people” or fill in missing details like dates and places, for volunteers who digitize and catalog photographs, and for all who support the Museum financially through memberships and donations.

In that theme of giving thanks, this month’s history column features a family scene from Thanksgiving Day 1943.

By comparing this photograph to others in our archives, we have discovered that a mystery photograph we used for our December 2015 column, titled simply “Al and Hilda” was not a photo of “Hilda,” at all.

Handwriting on the back of that 1957 snapshot had faded, leading to an incorrect recording of the name “Hulda.” The next step was to search for any images of an “Al and Hulda,” which eventually led us to Albrecht and Hulda Soeneke and their extended family, as seen in this month’s featured photo.

The family’s connection to San Juan Island centers around Hulda, born in 1890 in Finland, who emigrated to the U.S. about 1907. Known then by her maiden name of Hulda Groop, she met William Lind in New York City. By 1910 they were on San Juan Island, soon to settle on Mitchell Bay after buying land in 1914 from Edward and Alice Scribner. (You can see their circa 1891 Scribner Cabin on the grounds of the Museum today. It was donated and relocated there in 1988.) Hulda and William Lind would have three children together; William, Jack, and Lila, before William, Sr. died in 1918 during the influenza pandemic.

The next year, Hulda married islander Henry Briggs. She and her children lived for a short time on Waldron Island with Briggs, before returning to San Juan Island where she was granted a divorce a few years after that. Hulda had become a close friend of Jim Crook, who invited her to bring the three children and live in his home at English Camp, which they did for a few years. In 1923, Hulda met mainlander Albrecht Soeneke, owner of Farwest Fisheries, at a dance in Friday Harbor while he was visiting San Juan Island. They married the next year when Hulda and children left the island for a new life in Seattle and the outer coast with Al. A year later, the Soenekes welcomed daughter Alberta to the family and the rest becomes a Seattle story.

We would not have known how Hulda and her first three children came to live on San Juan Island, or why photos of them taken later in Seattle were donated to the Museum, without the assistance of family members Becki Day and her cousin Dwyer Dale, Jr., who generously shared some extended Lind and Soeneke family history for this story. Thank you, Becki and Dwyer!