“Return to Saigon” by Larry Duthie 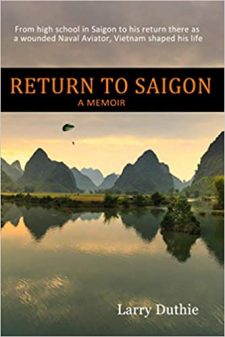 Larry Duthie has published a memoir of his years as a Navy pilot during the Vietnam war, titled Return to Saigon. The book is a combination of day-by-day details of flying bombing runs, the terrifying experience of being shot down and quickly rescued, and an extended love letter to all the young men he served with during those years.

The title stems from the fact that he attended one year of high school in Saigon, then returned to bomb the country from the air, and then returned yet again in later years to visit and to attain a measure of reconciliation with a few of the Vietnamese people.

Years after the events of this book, Larry and his wife Roz came to San Juan Island in 1978 to buy and publish the Friday Harbor Journal, which he continued until the mid-‘80s.

And when he began suffering what we now call PTSD he credits PhD psychologist Lance Sobel of Friday Harbor, his friend and sailing buddy, for helping him begin to heal.

The book is available from Amazon and will be available in bookstores in a couple of weeks.