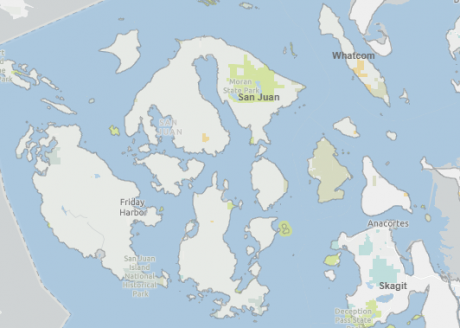 By State of Washington Recreation and Conservation Office

Recreation and conservation lands managed by local, state and federal governments in Washington state can now be viewed easily online in a new mapping application.

The Public Lands Inventory web app displays more than 18.8 million acres of public lands used for recreation or wildlife habitat in Washington. Information also is displayed about the type of use, owner, legislative district, year of acquisition, purchase price and acreage.

“This map goes a long way to taking the mystery out of what land is owned by the public,” said Kaleen Cottingham, director of the Recreation and Conservation Office. “The app should make it easier for land managers to plan their purchases, partner with neighboring landowners and improve efficiency in land transactions.”

The online mapping app, for example, shows that more than 12 million acres of Washington’s 45.6 million acres are owned by the federal government, the majority aligned with mountain ranges. Recreation and conservation areas in cities and counties account for more than 257,000 acres.

The Legislature requested and funded this update to the Public Lands Inventory, which previously was a written report.

Data for the map came from the Washington Department of Fish and Wildlife, Department of Natural Resources, State Parks and Recreation Commission, and the Washington Hometown Project, which is a private company that collects information from all the major public recreation agencies as well as from county, city, utility and private assets. The Recreation and Conservation Office contracted with ESRI to collate the data and create the web application.