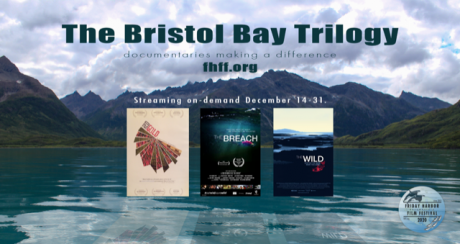 One positive event in the struggle to protect salmon in the Kvichak and Nushagak rivers that feed into Bristol Bay is the Army Corps of Engineers’ denial of a key permit to the Pebble Mine in November 2020. The film festival presents these films in celebration of that decision.

Imagine a pristine Alaskan watershed with the most productive Sockeye salmon rivers in the world, teeming with millions of native fish pushing upriver to spawn. Now imagine the world’s largest open-pit gold and copper mine at their headwaters. This film by co-directors Travis Rummel and Ben Knight follows the subsistence and commercial salmon fishermen of Bristol Bay, Alaska, as they work tirelessly to make their living off the land and water and combat the proposed Pebble Mine.

This film, directed by Mark Titus, explores the alarming drop in the Pacific Northwest’s wild salmon population. The filmmaker, who is an Alaskan fishing guide, was determined to discover where the fish have gone and what might bring them back. As he embarked on his journey of discovery, he unraveled a trail of human hubris, historical amnesia, and potential tragedy – all conspiring to end the most sustainable wild food left on the planet.

For millennia, wild salmon have survived ice ages, continental shifts, and most destructively, human beings.  Fisherman/filmmaker Mark Titus set out to document the urgent threat facing wild salmon runs in Alaska’s Bristol Bay, where there are plans to construct a massive open-pit copper mine in the headwaters of the most prodigious wild sockeye salmon run in the world. Picking up where “The Breach” left off, “The Wild” is an urgent call to action, examining what it means to save what we love.

Friday Harbor Film Festival will present films on-demand 24/7 for 10-14 days each month through September. Each will include a scheduled livestream, interactive Q&A with the filmmaker and expert panelists discussing the issues raised by the film. Q&A sessions will be recorded and be available on-line free of charge.

The 9th annual Friday Harbor Film Festival is scheduled for Oct. 14-24, 2021. FHFF is planning a hybrid event, including in-person venues and online screening.

Filmmakers are encouraged to submit their entries for consideration for both The Director Series and the October FHFF through the Film Freeway link at fhff.org beginning Dec. 15.