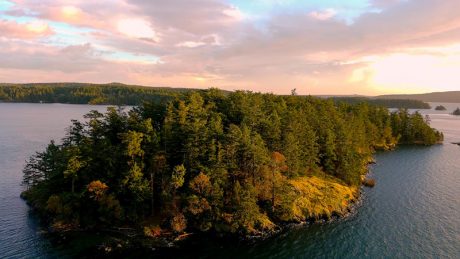 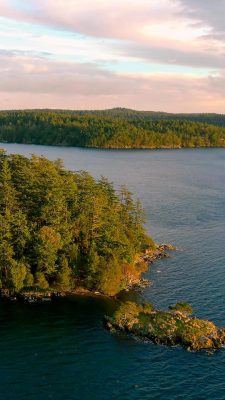 The donor who made the acquisition possible is Malcolm Goodfellow, who just this past summer made a $5.2 million gift to the Preservation Trust, resulting in a 36-acre expansion of Turtleback Mountain Preserve and a return of six acres of shoreline property (known as Haida Point) to the Lummi Nation.

Reef Island is a prominent part of the Wasp Island group, which the Preservation Trust has long regarded as a high-priority area for conservation.

The island is home to 17 acres of a rare mixed Douglas fir, seaside juniper and Garry oak forest, bounded by just under a mile of rocky shoreline and pocket beaches. SJPT’s management goals on Reef will be to maintain these conservation values and remove the few signs of human use, via recycling and “re-homing.”

In keeping with these conservation goals, Reef Island will remain private and not open to the general public. It will, however, be available on a limited basis for SJPT staff-guided tours and educational, cultural, and scientific purposes.

“This newest addition presents a golden conservation opportunity for the San Juan Islands, as Reef is one of the few remaining singly owned islands in the archipelago,” says SJPT Executive Director Angela Anderson.

Reef Island Preserve adds to other SJPT-protected areas in the Wasp Islands (on McConnell) as well as other nearby islands protected by WA State Parks (Jones Island) and The Nature Conservancy (Yellow Island).

For anyone who values the beauty and intact wildlife habitat of the San Juan Islands, the permanent protection of Reef Island in its natural state is one more thing to be thankful for this year.