The “Idaho Stop” is Now Legal For Bikes in Washington 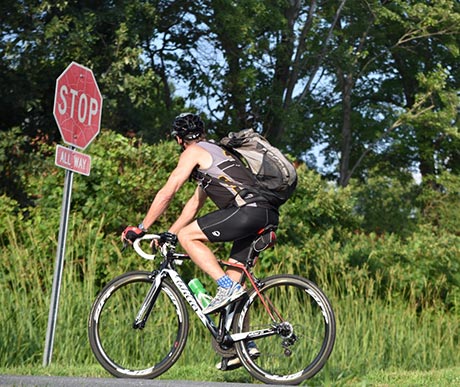 Vehicle drivers may not be aware of a recent law that allows bicyclists to treat a stop sign as a yield sign in some instances – and may be cynically assuming that the cyclists they see are breaking the law.

The new law does not make it legal to go through stop signs as if the sign wasn’t there. If someone is entering a crosswalk or if another vehicle arrives at an all-way stop before a bicyclist, the cyclist still has to stop and yield. This does not change the rules of the road regarding who has the right of way.

It also does not apply to school bus stop signs or stop signs at railroad crossings.

Rather, SSB 6208 simply acknowledges that when you’re on a bike your momentum is important, and it’s not just easier but also sometimes safer to roll through a stop sign rather than stopping completely. Initial acceleration on a bike is slow, and sometimes coming to a dead stop in mixed traffic can both put the biker in a vulnerable position and unnecessarily slow other traffic.

The change comes a year after Oregon passed a similar law and decades after Idaho. So now the law is consistent in the 3 states of the northwest.

The State House of Representatives voted 77–20 to pass SSB 6208 with bipartisan support, following an almost-unanimous 44–1 vote in the Senate, and was then signed into law by Gov. Jay Inslee.