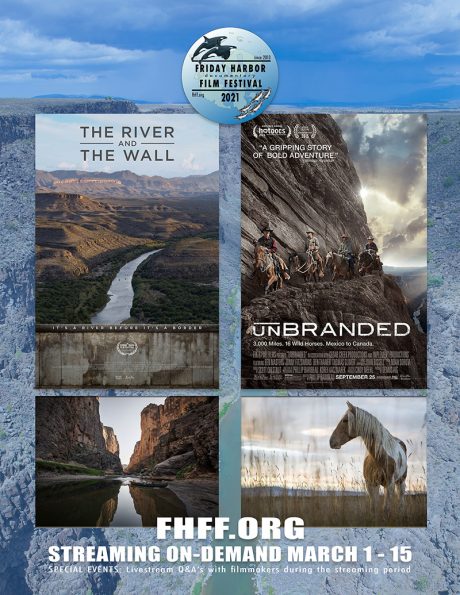 Screen each film for only $2.95. Since December this series has attracted film lovers from 16 countries including Europe, Canada, Australia, and the US.

“Unbranded,” directed by Phil Baribeau, is an in-between-college-and-real-life adventure, a message, and a wakeup call for better land and wild horse management. After adopting a group of wild mustangs from the Bureau of Land Management and then training them, four recent college grads travel 3,000 miles from the Arizona-Mexico border up the spine of former ‘wild west’ to the Canadian border.

Traveling through almost exclusively public lands they live out their dream of being 19th century frontiersmen while using a 21st century camera to document their rite of passage through the deepest backcountry of five states in the American West. Woven into this adventure is the ongoing debate about how to manage wild horses on public lands, where the BLM clashes with activists and ranchers when they capture wild horses and recruit people to adopt them. The filmmakers have created a powerful film following the journey of 4 men, 16 mustangs, and a changing American West.

“The River and the Wall,” directed by Ben Masters, follows five friends on an immersive adventure through the unknown wilds of the Texas borderlands as they travel 1200 miles from El Paso to the Gulf of Mexico on horses, mountain bikes, and in canoes. Because conservation filmmaker Ben Masters realized the urgency of documenting the last remaining wilderness in Texas, he recruited NatGeo Explorer Filipe DeAndrade, ornithologist Heather Mackey, river guide Austin Alvarado, and conservationist Jay Kleberg to join him on a journey along the U.S.-Mexico border.

They set out to document the borderlands and explore the potential impacts of a wall on the natural environment, but as the wilderness gives way to the more populated and heavily trafficked Lower Rio Grande Valley, they came face-to-face with the human side of the immigration debate and entered uncharted emotional waters.

Director Phil Baribeau and Filmmaker Hilary Pierce will each participate in a free livestream Q&A. Check online at fhff.org for the dates and times. If you miss the livestream, you can watch free online.

Coming March 16-31, with the theme “Hope for Environmental Justice,” the festival will show two feature films, “The Return of the River” and “The Memory of Fish.”