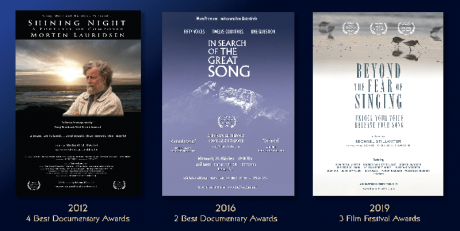 From the Friday Harbor Film Festival

Join the Friday Harbor Film Festival’s free livestream Q&A event about the films from the series “In Search of the Great Song,”at 10 a.m., Friday, Feb. 12. A recording of the livestream will be available free at www.fhff.org for those unable to watch at the scheduled time.

The Friday Harbor Film Festival is delighted to present “In Search of the Great Song,” an extraordinary musical documentary series directed by Michael Stillwater and co-produced by Michael and Doris Laesser Stillwater who were inspired by their “dedication to the underlying source of music and song.” Watch on-demand through Feb. 17. Screen Individual movies for $3.95 or purchase a trilogy pass for $8.95.

The special Q&A will feature San Juan Islanders Morten Lauridsen and Alex Shapiro, who appeared in all three films, together with series creators Michael and Doris Laesser Stillwater who will be joining us from Finland. Audience interaction will be available during the event or by submitting a question for consideration in advance online by clicking here.

Michael Stillwater is a filmmaker with a background in music, as composer, performer and educator. He is founder of Inner Harmony and Song Without Borders, production agency for his filmmaking and a project of US nonprofit Living Bridges. Originally from the West Coast of the US, he worked for years in Switzerland, and now resides in Finland with his wife and film series co-producer, psychologist Doris Laesser Stillwater.

Doris Laesser Stillwater, co-producer of the In Search of the Great Song trilogy, is a licensed Psychologist, trained in Gestalt, Bodyoriented and Jungian Psychotherapy. She has provided therapy with a focus on Transpersonal Psychology and led retreats in Europe and America. She has extensively studied Tibetan Buddhism, which has substantially influenced her work. Together with Michael Stillwater and film composer Gary Malkin she is a co-creator of the landmark palliative care resource, Graceful Passages.

Morten Lauridsen is considered to be one of the greatest living choral composers and certainly one of the most frequently performed around the world. He is a recipient of the National Medal of Arts and was also named an ‘American Choral Master’ by the National Endowment for the Arts. He was composer-in-residence of the Los Angeles Master Chorale (1994–2001) and has been a professor of composition at the University of Southern California Thornton School of Music for more than 40 years. Composer, performer and educator, Lauridsen has spent his lifetime listening in deep silence to the ‘inner song’, bringing forth choral works of radiant beauty for the world to hear and sing.

Alex Shapiro aligns note after note with the hope that at least a few of them will actually sound good next to each other. Her persistence at this activity, as well as non-fiction music writing, public speaking, arts advocacy volunteerism, wildlife photography, and the shameless instigation of insufferable puns on Facebook, has led to a happy life. Drawing from a broad musical palette that giddily ignores genre, Alex’s acoustic and electroacoustic works for small chamber groups and large ensembles are known for the seamless melding of live and recorded sounds that often include striking visual and physical elements, and for the innovative uses of technology.