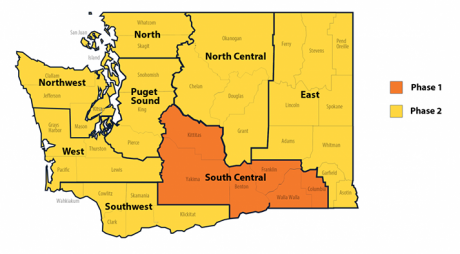 The new regions progressing to Phase 2 are:

The only region not moving to Phase 2 is the South Central region – which includes Ellensburg, Yakima, the Tri-Cities and Walla Walla.

Additionally, the governor announced Thursday evening that the five regions progressing will be able to do so starting Sunday, Feb. 14. The holiday weekend provides a large portion of a restaurant’s yearly revenue, and by moving up the region’s reopening date will allow dining establishments to benefit.

“I know this creates more options for restaurants to make Valentine’s Day special for couples who hoped they could have a night out,” Inslee said. “I am confident people, young and old, will celebrate safely. And if it’s a first date that doesn’t go well, remind them to stay six feet away from you.”