A Sunflower Star is Born

Among the world’s hundreds of types of known starfish (or seastars as I’ll call them), our Pacific coast sunflower stars are true record breakers.

They are the largest seastar in the world, with an arm-tip-to-arm-tip “wingspan” of more than two feet when fully grown. Using their thousands of tube feet, sunflower stars can glide a hundred-yard dash in under an hour; certainly bronze medal speed at least! 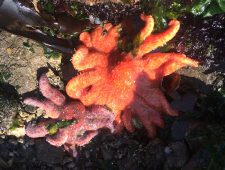 They’re well known to ocean lovers for their brilliant colors, and to marine biologists for the fear they invoke in their many types of prey. Contact with a sunflower star will cause seafloor species – such as scallops and sea cucumbers – to defy their reputation as sedentary creatures and swim, in a desperate attempt to escape the clutches of the star’s 21+ arms.

Recently, sunflower stars broke another record, but one less worthy of celebration: of the dozens of west coast seastar species impacted by a mysterious syndrome known as seastar wasting disease, sunflower stars were hit the hardest.

Starting about eight years ago, sunflower star populations up and down the coast started to plummet, with the syndrome turning these majestic beasts into piles of goo.

They have now all but disappeared from the southern part of their former range, and their numbers in our area and further north are drastically reduced.

This calamity led the International Union for the Conservation of Nature to include the species in its latest “red list” of endangered species, the first such listing for any seastar.