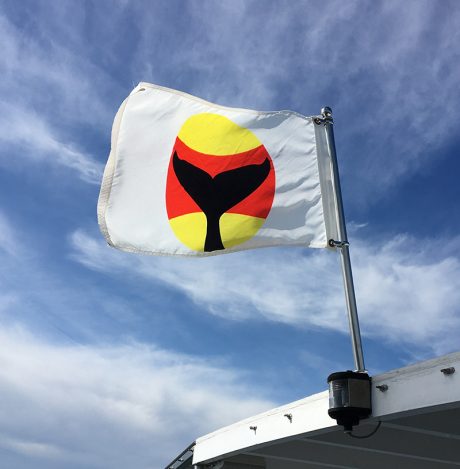 Across the region, homes and businesses will soon be displaying the stars and stripes to herald the Fourth of July.

Meanwhile, on the waters of the Salish Sea, another flag can be spotted — the whale warning flag.

The Fourth of July weekend marks one of the busiest times of the year for boating in Puget Sound, and San Juan County’s Environmental Department is urging all boaters to join the effort to keep whales and boaters
safe by watching for and using a whale warning flag.

Using the flag is simple: simply run it up your rigging, zip tie it to a pole to deploy from railing, or use suction cups that stick to flat surfaces. When you spot whales, or other boats grouped together already flying whale warning flags, slow down and take a moment to figure out where the whales are relative to you. Then, put up your whale warning flag and spread the word.

Keep the flag up while the whales are within a half-mile of you, and maintain compliance with whale protection laws and guidelines by doing the following:

The waters of Puget Sound are critical habitat for the endangered Southern Resident Killer Whales, who are highly impacted by vessel disturbances.

“Boaters in the Pacific Northwest can play a huge role in the recovery of the Southern Residents by doing their part and helping to protect not just these whales but all of our marine wildlife and resources,” says Alanna Frayne, Soundwatch & Be Whale Wise Program Coordinator at The Whale Museum.

“One of the best ways for boaters to help is to be proactive and familiarize themselves with the regulations and guidelines before getting underway. One of the biggest concerns with recreational boaters is excessive speed (over 7 knots) when in the vicinity of Southern Residents. The Whale Warning flag is a tool used to alert boaters to the presence of whales, so when you see the flag you’ll know to slow down and keep a sharp lookout!”

Join the community effort to protect both whales and boaters by always keeping an eye out for the whale warning flag flying, and by obtaining one of your own at www.WhaleFlag.org.

The San Juan County Environmental Department works to preserve freshwater resources, protect the marine environment, and coordinate recycling and solid waste throughout the County by implementing integrated projects and programs in partnership with others.

Be Whale Wise is a partnership of governmental agencies, non-profits and other stakeholders in British Columbia and Washington state to research, implement and educate regarding laws and best vessel practices to protect the unique and fragile marine resources found in the area.