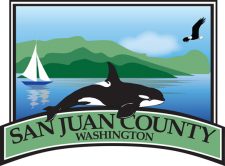 The Johnsons, who own 38 acres at the corner of Nordstrom Lane and Orcas Road, first filed suit over alleged damages caused by water runoff. A second lawsuit soon followed claiming violations of the Public Records Act in connection with a records request made by their attorney.

The settlements were reached after some but not all of the records act claims were dismissed and a $10,000 penalty was assessed against the Johnson’s attorney for holding back records in the property case.

The property case alleged damages to the Johnson’s property and sheep caused by the relocation of a culvert and alterations to Orcas Road undertaken in 2019. The road alteration added safety bike lanes, altered the road curve, and added filter strips to catch surface water.

Before the settlement, the Johnsons paid a $10,000 court-imposed penalty assessed for violation of court rules regarding disclosing documents.

The county’s insurer agreed to pay $20,000 to the Johnsons to settle the case, an amount Prosecutor Randall Gaylord called a “nuisance” value. “The county’s insurer held firm on this one, and we are grateful for the good work by the attorneys involved,” said Gaylord.

The public records case began with a broad request for documents involving the Orcas Road project by the Johnson’s attorney. A first installment of about 11,000 pages was provided one month later. After a conversation with the Johnson’s attorney, it became clear that the requestor sought a much larger range of records than was originally understood. This resulted in the production of over 20,000 additional pages of records.

After all 31,000 pages of records were provided, the Johnsons sued claiming the county should have provided more documents from the outset and also that the county had the duty to seek out and provide the records of contractors working on the project.

After several court hearings, the Superior Court ruled that the county was not responsible to produce the contractors’ records. The court also ruled the county should have performed a wider search in the first instance.

“This is a really frustrating aspect of the public records laws,” said Gaylord. “If a requester doesn’t believe they received what they asked for, then they should contact the agency, particularly when the request is for a broad set of records. Every public records clerk can’t be a mind-reader, but the law is very strict, and it can lead to penalties due to a simple misunderstanding. Moreover, when the county acts in good faith to correct a misunderstanding before a lawsuit, as was the case here, there should be safe harbor from penalties.”