Island Stage Left’s ‘Much Ado About Nothing’ Premiers Tonight 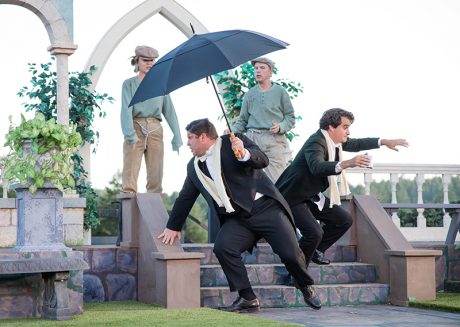 Actors rehearse “Much Ado About Nothing.” Island Stage Left, Contributed.

“I love it after COVID because it’s got a happy ending,” said stage director Helen Machin-Smith. “It feels like a joyous play, after all – people learn from their mistakes and go on, the romantic cycle continues. It feels like a summer play.”

COVID restrictions have made live theater nearly impossible for the past year, even outdoors. But the state’s reopening regulations allow the show to go on.

“When I realized it, a huge wave of relief welled up,” Machin-Smith said.

Safety remains the top priority, though: cast and crew are fully vaccinated, and a seating area will be provided for audience members who want to maintain distance from those who are maskless. 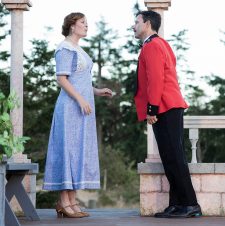 Actors rehearse “Much Ado About Nothing.” Island Stage Left, Contributed.

“Much Ado About Nothing” takes place in a world emerging from wartime, eager for sunshine and laughter. Benedick, a returning military officer, engages in bouts of mocking repartee with Beatrice.

Meanwhile, Claudio, a heroic junior officer, falls head over heels for Hero, a sweet, beautiful young heiress. But a series of sly tricks – some well-intentioned, some thoroughly vicious – throw the characters into doubt and confusion. ISL co-founder Daniel Mayes plays Hero’s father, a man shaken to the core by false accusations against his daughter.

Machin-Smith has set the story in the English countryside, in the summer of 1919, at the end of World War I, and of the Spanish flu pandemic.

The Gamble of Scheduling

Preparing the play over the past few months was a gamble. The cast of 14 includes professionals from all over the country.

If the tiny theater company had started paying actors and crew, buying props and costumes and building the set, only to be canceled due to COVID, the consequence was obvious: “Stage Left goes belly up,” Machin-Smith said.

But the gamble paid off. Asked for her favorite line from the play, Machin-Smith’s answer seems tailored to the birth of this production: “But then there was a star danced, and under that was I born.”

Bring blankets and/or warm clothes (even parkas) for when the sun goes down. Admission is free, and donations are gratefully accepted.

What: Shakespeare’s”Much Ado About Nothing,” set during the Spanish Flu pandemic.